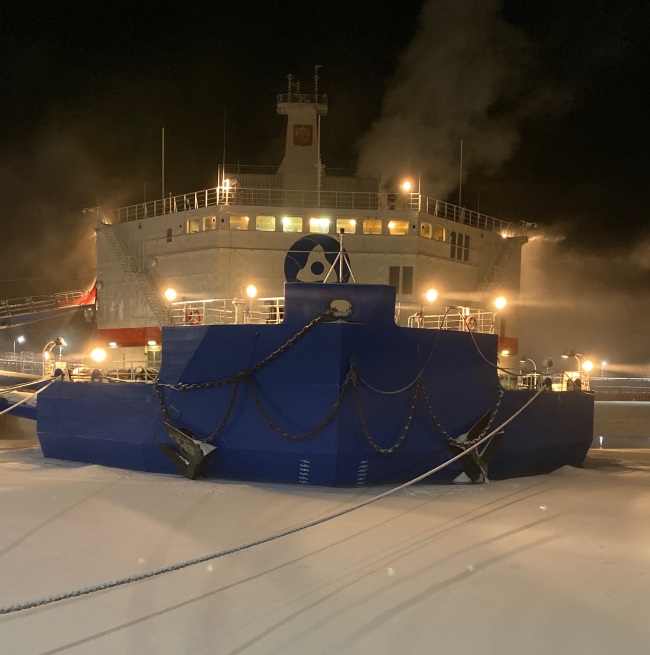 19th December, 2019, Pevek, Russia – The floating power unit (FPU) Akademik Lomonosov has been connected to the grid, generating electricity for the first time in the isolated Chaun-Bilibino network in Pevek, Chukotka, Russia’s Far East. This happened after the Russian regulator Rostekhnadzor issued an operations permit, as well as permission to connect to the northern electricity grid maintained by Chukotenergo JSC.

Pevek residents marked this symbolic day by turning on the fairy lights on the town’s Christmas tree.

Rosatom’s Director General Alexey Likhachev said: “After its connection to the grid, Akademik Lomonosov becomes the world’s first nuclear power plant based on SMR-class technology to generate electricity. This is a remarkable milestone for both the Russian and the world’s nuclear energy industry. This is also a major step in establishing Pevek as the new energy capital of the region”.

The project has been welcomed by scientists, nuclear energy experts and environmentalists across the world. Kirsty Gogan, Head of Energy for Humanity, an NGO (London), said: “For hard-to-reach regions, with a climate that is simultaneously too harsh to support the use of renewable energies and too fragile to continue its heavy dependence on fossil fuels, small nuclear, including floating plants, is the only answer. Akademik Lomonosov is the first step towards demonstrating its potential for decarbonisation of the Arctic and beyond”.

Connecting the FPU generators to the network was carried out after parameter synchronisation with the coastal network. This happened after the completed construction of the onshore facilities, ensuring the transfer of electricity from the FPUs to Chukotka’s high voltage networks. A vast amount of work was also carried out on constructing the heat supply networks. Connecting the FNPP to Pevek’s heat networks will be completed in 2020.

Once the FNPP will begin commercial operations, it will make it Russia’s 11th nuclear power plant. It will also mark the first time in Russia’s nuclear energy history that two nuclear power plants (the Akademik Lomonosov FNPP and the Bilibino NPP) operate in the same region.

Notes to the editor:

The nuclear FPU Akademik Lomonosov is equipped with two KLT-40C reactor systems (each with a capacity of 35 MW) similar to those used on icebreakers. It is designed by Rosatom to work as a part of the Floating Nuclear Thermal Power Plant (FNPP). The vessel is 144 metres long and 30 metres wide, and has a displacement of 21,000 tonnes. Akademik Lomonosov – the first ship of this kind – was named for 18th century Russian scientist Mikhail Lomonosov. Akademik Lomonosov is a pilot project and a ‘working prototype’ for a future fleet of floating nuclear power plants and on-shore installations based on Russian-made SMRs. The small power units will be available for deployment to hard-to-reach areas of Russia’s North and Far-East, as well as for export.

SMR-based nuclear power plants (featuring reactors of less than 300MWe each), floating and on-shore, are designed to made it possible to supply electricity to hard-to-reach areas, smaller grids and off-grid installations. These small nuclear reactors can operate non-stop without the need for refuelling for three to five years, thereby considerably reducing the cost of electricity generation. Whilst variable renewable energy installations such as wind and solar for such areas require an expensive a polluting diesel back-up or an expensive energy storage, small nuclear power plants ensure uninterrupted electricity supply even for energy intensive users. The reactors have the potential to work particularly well in regions with extended coastlines, power supply shortages, and limited access to electrical grids. The plant can be delivered to any point along a coast and connected to existing electrical grids.

Financial and economic policy Conference held
June 16, 2021
The Lepse floating maintenance base no longer poses a nuclear threat to the Arctic
June 15, 2021