On December 10, 2019, a delegation of the Ministry of Scientific Research and Technological Innovation of the Republic of the Congo headed by Minister M. P. E. Cussu-Mawungu arrived to Moscow by an invitation of Director General of ROSATOM Alexey Likhachev.

The Congolese delegation was familiarized with capabilities and competences of the Russian nuclear industry as regards the implementation of projects to build nuclear science and technology centers and large and small nuclear generation facilities. 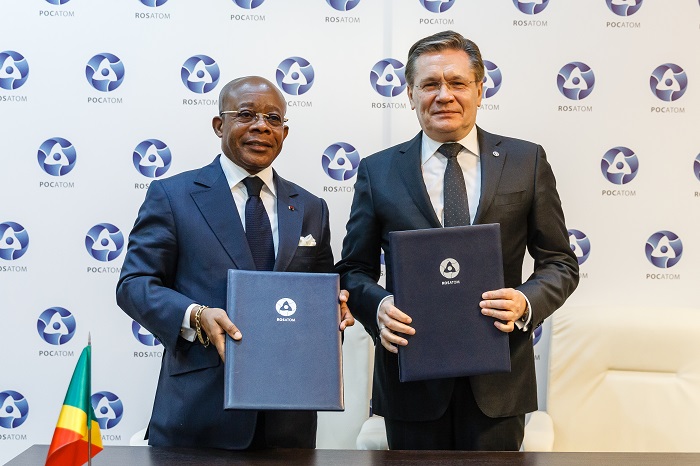 At the meeting, Director General of ROSATOM Likhachev and the Minister of Scientific Research and Technological Innovation of the Republic of the Congo M. P. E. Cussu-Mawungu noted the importance of the documents on the peaceful atom cooperation: the roadmap on tuning of the Russian-Congolese cooperation in the field of the peaceful uses of atomic energy and the Agreement between the Government of the Republic of the Congo and the Government of the Russian Federation Concerning the Cooperation on the Peaceful Uses of Atomic Energy.

The parties discussed practical areas of further interaction in the field of development of the nuclear infrastructure of the Republic of the Congo in the staff training and improvement of awareness of the Congolese people about nuclear technologies.

The Record signed by Alexey Likhachev and M. P. E. Cussu-Mawungu confirms arrangements of the countries to focus efforts of the parties to implement the priority project, i.e. the construction of the Nuclear Science and Technology Center in the territory of the Republic of the Congo based on Russian competences.