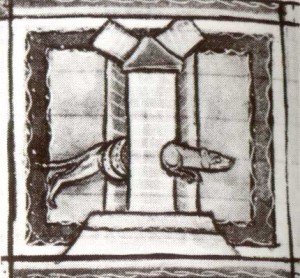 The tale of the sunny lizard originated from the Greek “Physiologus”. As it grows old, the lizard creeps out through a chink in a fence overlooking the east. Upon turning its blind eyes to the rising sun it regains the lost eyesight. In the “Physiologus” it is likened to a man whose eyes and heart were blinded, but as soon as he turns them to the light of truth, to the Saviour, he recovers his sight and his shabby robe becomes new.
In the later Latin versions the tale of the sunny lizard was usually placed in the chapter about the lizard /lacerta/. This is the case with Brunetto La-tini /I.V.145/. Albert the Great calls it “scauram” /XXV.II.49/. The text of the bestiary proceeds not from “Physiologus” but from the writing by Isidore /XII.IV.37/ which had lost the symbolic interpretation of the sunny lizard.