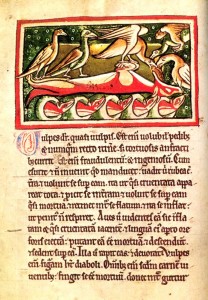 The Fox /vulpes/
Traditionally the fox is a symbol of cunning and guile. The text of the bestiary combines the description by Isidor /XII.2.29/ with the tale of “Physiologus”. The origin of the word “fox” /vulpis/ from “volubilis pedibus” /walking in circles”/ is borrowed from Isidor. The implication is that a fox makes those circuitous pug marks because he never runs straight but goes on his way with torturous windings. In the Latin versions the story of the fox’s cunning, to be found in “Physiologus”, was complemented with new details. When the fox is hungry, he rolls himself in red mud so that he looks as if he were stained with blood. Then he throws himself on the ground and holds his breath, his tongue hanging out. The birds, seeing all this, think that he is dead and come down toward him. In an instant he jumps to seize one of the birds. Like the Devil, the fox who spoils the Master’s vineyard /The Song of Solomon, 2:15/ looks dead to those who live the life of flesh and fall prey to the Devil’s tricks upon his being bewitched by Evil. The story about the ingenuity of the fox catching birds arises from Oppian /Galievtica, 11.107/. The fox became the main character of the medieval “Roman de Renard” whose connection with the bestiaries should be noted here. Likewise, the bestiaries of the thirteenth century, are influenced by the satiric “Roman de Renard”. The plots of the fables and of “Roman de Renard” are represented in the Romanesque and Gothic art /for instance, the reliefs of the old tympanum in the portals of St.Ursin in Bourges/. The miniature of the bestiary reproduces the traditional representation of the fox feigning death and surrounded by birds.