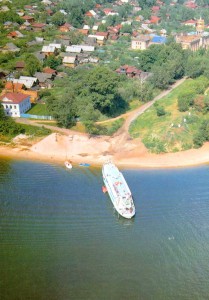 The Volga River is the longest river in Europe, about 2,300 miles (3,700 km).
It originates at an elevation of only 740 feet (225 m) in the Valday Hills northwest of Moscow, connects with the Rybinsk Reservoir. The river heads east past Yaroslavl, Nizhny Novgorod and Kazan. From there it turns south past Samara and Volgograd.
Since the initial elevation is so low, the river flows slowly, and finally enters the Caspian Sea, below sea level in a wide delta near Astrakhan. Canals connect the river with the Baltic Sea via the Rybinsk Reservoir.
The Moscow Canal connects it with the Moscow River and the Oka River. At Volgograd, it links, through canals, with the Don River and Black Sea. The Volga carries about half of all river freight in Russia.
Numerous dams (bypassed by locks) provide hydroelectricity and water for irrigation. The river, known in Russian folklore as Mother Volga, has played an incalculable part in the life of the Russian people.