From the Arcade, following an alley along the sea, which remains to our left, we reach Aleya Slavy (the Alley of Glory), which holds a special place in the park. 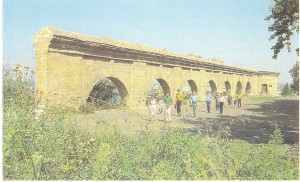 A memorial complex was unveiled here on April 10th, 1964, on the twentieth anniversary of the Liberation of Odessa. It begins at the main alley with a spacious square with two steles of red polished granite on either side. On one are the dates 1941-1945, and on the other an image of the Mother-Country and the inscription:

“Your Country gave you immortality. Your names are not forgotten”. 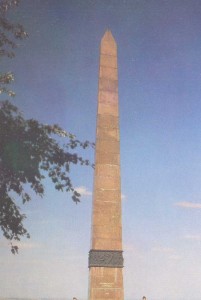 On either side of the alley, under the shade of young poplar trees is a line of tombstones made of labradorite. Buried here are the heroes of the defence of the city, partisans and underground workers, and heroes of the liberation of Odessa, and with them are their comrades-in-arms who died after the war.

The two first tomb-stones commemorate the crews of two submarines, M-33and M-60, that sank in the Odessa Bay in August and September, 1942, while carrying out an assignment. Many years later they were found at the bottom of the Bay in the Bolshoi Fontan area. Both had fallen victims to mines and lay a few hundred metres from each other. The names of forty-three members of their crews are inscribed on the marble stone.

The Alleya Slavy (Alley of Glory) descends towards the sea in a series of terraces, and when you walk down it the horizon seems to rise higher and higher until with the sea background the memorial to the Unknown Sailor stands out stark and clear. It was unveiled on May 9th, 1960, the fifteenth anniversary of the victory over fascist Germany and was sculpted by Mikhail Naruzetsky. On the twenty-one-metre obelisk of red polished granite is the inscription “To the Unknown Sailor” and the date of the unveiling, 1960. The bas-reliefs on its sides depict four glorious pages from the history of Odessa and its sailors, the defence of Odessa in 1854, the uprising on the battleship Potemkin in 1905, the establishment of Soviet power in 1918, and the heroic landing in Grigoryevka during the defence of the city in 1941.

At the foot of the obelisk lie a bronze automatic rifle and a sailor’s cap. In front of the monument within a bronze laurel wreath the eternal flame burns, a symbol of the eternal memory and eternal glory of the heroes who gave their lives for the happiness and independence of their country.

Since 1968 the youth of the city, members of the Young Communist League and of the Pioneer Organisation stand at the memorial as a guard of honour. Only the best members have the right to form part of this guard. Each day, winter and summer alike, in good and bad weather, the grandsons of those who fought take up guard duty in memory of those who gave their country their most priceless possession, their lives. Each hour, the strains of a Requiem (music by I.Aseyev, words by the poet Robert Rozhdestvensky) ring out.

This is one of the hero-city’s holiest places and veterans of the Great Patriotic War come here. It is the site of Pioneer gatherings, and the place where members of the Young

Communist League receive their membership cards, and to this place the newlyweds come after the marriage ceremony when they lay flowers at the foot of the memorial and honour the dead by a minute’s silence.