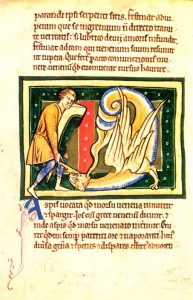 Asp /aspis/ 10.1X7.2 cm
The borrowings from the text by Isidore /XII.IV.12/ are joined together in the bestiary with the story of the asp from the “Physiologus”, a development of what had been written about the asp in the chapter about the weasel, which later in the Latin versions grew into a separate chapter. In the bestiary it was included into the section about snakes, which shows an attempt to put the zoological material in proper order. Following Isidor the bestiary derived the word “asp” /aspis/ from the Greek “iog” meaning poison. With one ear pressed to the ground, the asp stops the other ear with the tip of its tail so that it could not hear the singing of the charmer luring it out of its burrow. The story of the asp originated from the Psalter exposing the unrighteous, which says that their poison is like the venom of a serpent, like that of the deaf asp which stops its ears not to hear the voice of the charmer, the cleverest of all charmers /Psalms 57:5—6/.
Medieval writers likened the asp to a sinner who did not heed the word of God, or diabolic suggestions, likened him to the Devil itself, or sin. By describing the asp the bestiary implies a man listening with one ear to the call of secular joys and stopping the other ear not hear the voice of God condemning him. The story of the asp is present in the work by Vincent of Beauvais /Speculum Naturalis, XX, 20/. It is given a poetic interpretation by Philippe de Thaiin /1615—1628; 1655—1679/ comparing the asp with a rich man and adding the description of poisonous snakes to the story of the asp. Pierre of Beauvais complements the traditional story with the traits described in Herodot’s story of the dragon /III.107/ guarding the balsam tree. In the bestiary the story of the asp includes the information about poisonous snakes given by Isidor /XII.IV. 13—17/— dipsa, hypnalis, emorroris, prester, spectaficus, cerastes — to some of which separate chapters were devoted later.