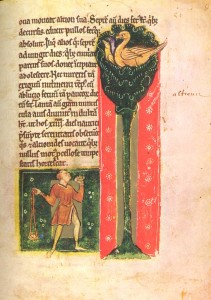 Cinomolgus /cinnamolgus/ 8.7 X 14 cm
Though the miniature showing the bird is placed next to the text about the halcyon and later the word “alciona” was written on the margins, it is a traditional illustration to a chapter about the cinomolgus given on f.51 v of the Saint Petersburg bestiary. The cinomolgus is an Arabian bird that builds a nest out of precious Cinnamon twigs and fruits high up in the trees. People try to get these nests by hitting them down with stones. The cinomolgus is already mentioned by such antique writers as Aristotle /XI.61-7. a 7/, Pliny /X.33.50/ and Solinus /33.15/. The story in the bestiary repeats the story by Isidore /XII.7.23/. It reappears in the treatises of Pseudo-Hugh /111.30/ and Albert the Great /XXIII.I.21/.