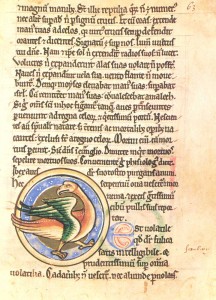 Coot /fulica/ medallion 6.2 cm in diameter
The early Latin versions of “Physiologus” did not distinguish between a heron and a coot /version “Y” says: “Herodius id est fulica”/- Version “B”, which the bestiary adheres to ascribes the qualities of the heron to the coot, while the heron itself is given other features. In the story of the heron, missing in the Saint Petersburg and the New York bestiaries, as well as in most bestiaries of the twelfth and thirteenth centuries, Isidor says /XII.VII.21/ that the heron protects his young. “Aviarium” /47/ pays more attention to the fact that the heron can fly high up beyond the clouds, identifying his flight with a gradual ascend of one’s soul to the heaven. The eastern versions of “Physiologus” retain the tale about the heron, “the bird of ardon”, which the Saint Petersburg bestiary refers to as fulica, the most intelligent and cautious fo all birds. Fulica does not eat cadavers, she has a home in which she stays all her life. The bestiary identifies the birds with a believer who lives as God wills it, in the bosom of the Church, eating of heavenly bread. Isidor /XII.VII.53/ speaks of the wisbom of the bird, while “Aviarium” /58/ develops the symbolic interpretation of this image. Philippe de Thaum /2749—2764/ compares the life of the fulica, who does not eat meat, with the asceticism of a monk mortifying his flesh, and her nest-with a hermit’s place. Guillaume le Clerc /1965—1986/ mentions that fulica feeds on fish and Pierre of Beauvais /III.208/ gives a lively description of the bird saying that she has the head and feet of an eagle, the body of a parrot and the tail of a falcon.