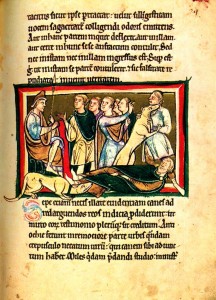 Dogs /canis/ 10.2X6 cm; 10.2; 2.5 cm; 10.2X6.5 cm
In the Middle Ages the dog was likened to a shepherd guarding his flock. In contrast to the tradition of the Old Testament and even to the text of the Gospel /Mark, VII:27/ the medieval man looked upon the dog as a symbol of fidelity, loyalty and vigilance. This attitude is reflected in the famous definition given to the monks of the Dominican order who were called “domini canis”, i.e., “dogs of the Lord”. The dog’s fidelity to Man is the key motif of the story given in the bestiary; it is also reflected in the miniature illuminating it, which shows in a passionate and vivid manner the dog as the man’s most loyal and true friend. But the bestiary also includes another story of the dog, the one originating from antique sources. In this story the dog swimming across the river with a piece of meat in his teeth saw the reflection of the meat in the water and dropped the real piece of meat in pursuit of the reflection. The dog symbo-lizes a man who gives up his chaste life in pursuit of some unknown pleasures. The chapter on the dogs finishes with the facts derived from Isidor /XI.II.28/ and traceable to Pliny /VIII.40.61/ about the wolf hounds born of a wolf and a dog and called “licisci” and known for their ferocity.