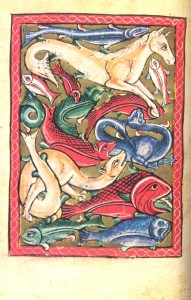 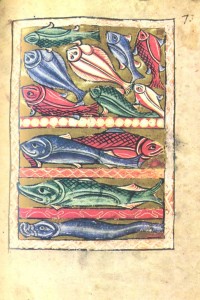 The bestiary extols the feelings of compassion, love for children and piety, allegedly typical of fishes, as an example for man to follow. Fish of a different species never mix with one another, he writes, thereby keeping the species pure, in contrast to disgraceful fornication among human beings and to their practice of cross-breeding animals.
The two spectacular miniatures, both the size of a page, show the outlines of fishes and marine creatures against a shining golden background, thus reminding one that “the kingdom of heaven is like unto a net, that was cast into the sea, and gathered of every kind” /Matthew 13:47/. Similar motifs are reproduced by the drawings in the bestiary of the University Library at Cambridge /II.4.26/. Such compositions of marine creatures have a fairly long history, dating back to the motif of the sea kingdom so popular with the ancients of the Mediterranean world beginning with the Crete-Mycenaean epoch. Like in Roman miniatures, fishes, sea snakes and hypocamps lay coiling on the bulging surfaces of antique vases forming decorative designs in antique mosaic and painting.