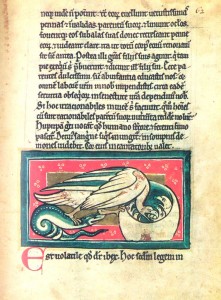 Ibis /ibis, ibex/ 10X5.8 cm
Ibis, which the bestiary mistakingly calls “ibex” taking it for a chamois, is one of the foulest birds. Isidor /XII.VII.33/ takes his information from Pliny /X.28.40; VIII.27.41/ and Aelian /X.29/ when he says that the bird feeds on cadavers and snakes’ eggs which he also brings to his younglings. The text of the bestiary is close to Latin version “B”. The story says that the ibis spends day and night on a river bank in search of dead fish but is afraid to enter water since he cannot swim. The bird is the image of a sinner for whom mundane daily cares are more than spiritual food, he shuns Christian waves and the knowledge of spiritual sacraments. “Aviarium” /57/ gives a symbolic interpretation of the bird. Phillipe de Thaun /2631—2748/ relates the allegory in poetical terms. Brunetto Latini /I.V.162/ emphasizes the fact mentioned in the bestiaries: the ibis cleans his stomach with his long beak.