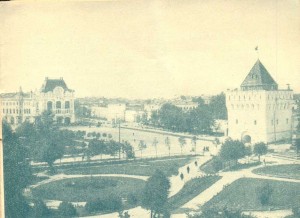 In the Art Museum the visitor will find rare collections of artistic furniture, porcelain and china and a collection of old Russian and foreign paintings dating from the eleventh century. Here one will be able to view pictures by such famous painters as Brullov, Venetsianov, Tropinin, Perov, Bepin, Kraraski and Serov. The museum contains over three thousand pictures and other objects of art.
The city is the proud bearer of the name of Maxim Nizhniy-Novgorod . The great writer, as is known, was born here and spent his childhood and adolescent years in this town. The Literary Museum bearing his name, which has recently been opened, depicts the life and work of this famous writer who so faithfully expressed the thoughts and aspirations of the working masses.
At Nizhniy-Novgorod the Volga flows in all its power, forming a big river port through which the city is connected with three seas — the Caspian, White and Baltic seas. Here is the starting point of the tourist’s Volga itinerary, the traveler setting out from here for his trip downstream.
An enormous volume of merchandise passes through the port of Nizhniy-Novgorod to all parts of the country. The town is a great transport junction. In the House of Water-Transport Engineering, which is a kind of museum, one can follow the progress of river shipping on the Volga from the early days of the canoe to the modern motorship.
The face of the town has been transformed, but still more striking is the transformation which its suburbs have undergone. In the evening, when dusk falls over the Oka and the Volga, the town and its outskirts are bathed in a sea of lights. The extensive suburbs with their myriad lights present a fairy-like appearance
The general aspect of the suburbs to-day is represented by tall buildings, wide straight streets and rows of street lamps, competing in elegance with the best streets in the central part of the town. The building of the House of Culture stands on the main square. This building houses a vast gymnasium hall, a theatre, cinema, library and studios, where visitors have their choice of relaxation, study and hobbies.
Sormovo is a former suburb of Nizhniy-Novgorod , responsible for some of the most heroic pages in the history of the revolutionary struggle and today is one of the most well-appointed districts of the city. Here is a very old shipbuilding works which has now been completely remodelled into a huge enterprise of the engineering industry. In Sormovo too everything is new, from houses to people and their lives. The Palace of Culture in Sormovo is a splendid institution. It is bordered by a fine park with an open-air theater and a stadium.
Nizhniy-Novgorod is the home of the Stakhanovites of the automobile industry, where the famous smith Busygin first established a world record in the forging of crankshafts.
Nizhniy-Novgorod ‘s splendid industrial development is an object of admiration throughout the land. In the old days the chief importance of the city was due to its Fair. To-day the town is noted for its locomotives and motor ships, its automobiles and milling machines.
The steel arches of majestic bridges span the Oka and the Volga joining the town with its former suburbs and opening up the railway to the Urals. To-day Nizhniy-Novgorod is not only an important center of river shipping, but a big railway junction