There are two such trips: one to the port town of Kherson, and the other to the town of Belgorod-Dnestrovsky. The Service Bureau in your hotel will be glad to make the arrangements. 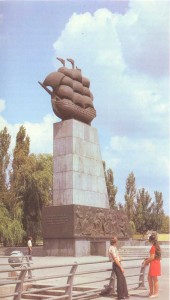 Depending on the time at your disposal the trip can be arranged for one, two or three days (with a night stopover in Kherson).

Kherson can be reached by sea in 2 hours 40 minutes on one of the comfortable hydrofoil boats.

It is one of the big towns in the southern Ukraine, the administrative, cultural and industrial centre of the Kherson region, and a river and sea port. It is situated east of Odessa on the banks of the Dnieper 28 km from the mouth of the river.

The town received its name from the ancient Greek colony Chersonesos which was in the Crimea on the territory now occupied by the city of Sevastopol. The Greek word Chersonesos means peninsula.

It was founded in 1778 as a military fortress on the specific orders of the Empress Catherinell.

Its construction was prompted by Russia’s long drawn-out struggle for an outlet to the Black Sea and the liberation of the Black Sea and Azov steppe-lands from the Turkish invaders; there was also the need to build a fleet in the south that could stand up to the strong Turkish fleet.

By the end of the 18th century the Kherson fortress became an important military base for Russian forces in the south.

The foundation stone of the town and fortress was laid by General Ivan Hannibal, the uncle of Pushkin’s mother. The ship-building docks, admiralty and arsenal were built under his guidance.

Field-Marshal Suvorov and Admiral Ushakov did a great deal to strengthen the Kherson Fortress. It was surrounded by earthen ramparts and a moat which could be flooded should the need arise. Inside the fortress there was an arsenal, gunpowder cellars, an armoury with a bullet-making workshop, a mint, a cathedral, barracks and the Palace of Catherine the Great and Prince Potemkin. The size of the wells, clad on the inside with hewn stone, is truly amazing. One of them remains to this day, although it is half-filled with earth. The Ochakov and Potemkin Gates of the fortress, the chapel, the gunpowder cellar, and the Catherine Cathedral built in 1781-1786 by the St. Petersburg architect Ivan Starov are also preserved. Prince Potemkin, a prominent Russian statesman of the 18th century, is buried in the Cathedral, as are military commanders who fought with Suvorov and lost their lives in the second Russo-Turkish war. At present the Cathedral has been taken over by the Museum of the History and Architecture. (Admission: 20 kopecks.)

The town owed its further development to the settlement of the southern steppes, and the advancement of shipbuilding and trade on the Black Sea.

Today Kherson is a town of two ports, the river port and the sea port. The latter is the pride of Kherson and it trades with forty-two countries of the world.

The river port is virtually next door, and is one of the major ports on the Dnieper River. It is the starting point for both passenger and cargo boats going up the river. The peak traffic on the river is reached in the summer months with the barges taking the famous Kherson water melons, grapes, apples and tomatoes up the river.

Kherson today is one of the biggest shipbuilding centres in the country and a major industrial centre of the Ukraine with many engineering plants, as well as light and food industries.

There are many lovely spots in the town such as parks, squares and gardens and also numerous monuments. Here we mention only some of them:

The Monument to the Shipbuilders. Unveiled in 1972 on Oktyabrskaya Ploshchad (October Square) on the Dnieper embankment on the site of the first docks in the city, this monument is the symbol of Kherson.

It shows a three-mast sailing boat, made of concrete and covered with copper plate, sailing on the Black Sea. The top part of the pedestal is faced with grey granite, while on the lower part there are two bas-reliefs. The first depicts the boat builders of the end of the 18th century, and the second, builders of the present-day. The inscription reads, “The first 66-gun boat of the Black Sea Fleet Glory of Catherine was built here in 1783”. On the other side is an excerpt from the decree ordering the founding of the town of Kherson, “in this place convenient, for. reasons of maritime and land advantage… shall a fortress and docks be built, and they be named Kherson …”.

Ushakov Monument. Unveiled in 1957 on the street bearing his name.

Obelisk to John Howard on Prospekt Ushakova (Ushakov Avenue). John Howard, the English Humanist and philanthropist, was born in 1725 in the family of a London merchant. When he inherited his father’s fortune, he decided to travel in Europe, and not engage in commerce. When Howard arrived in Russia he was invited by Catherine the Great to the Winter Palace. However, he turned down the invitation saying the purpose of his journey was to visit prisons, not palaces. In October, 1789, he arrived in Kherson, where he visited hospitals and prisons and treated the poor free of charge. The town at that time was in the throes of epidemics of typhoid, malaria and other diseases. He organised the campaign against the epidemics, but was taken ill himself and died. Before his death he asked that a clock be placed on his grave. His gravestone is a sundial designed by the St. Petersburg architect Vasili Stasov.

The Gun Memorial. This is situated on Ploshchad 13-go

Marta (March 13th Square). The square was named after the day of the liberation of Kherson from the nazi invaders, March 13th, 1944. The gun, a howitzer, was one that actually took part in the Great Patriotic War and travelled from the North Caucasus to the Brandenburg Gates in Berlin. It was set up on the square in 1975 when the twentieth anniversary of the victory over Hitler’s Germany was being marked.

The Monument to the Unknown Soldier with the eternal flame. This can be found in the Park of Glory. The inscription on the monument reads:

“You gave your life

At the entrance to the park one of the T-34 tanks used by the Soviet Army in the liberation of the town stands on a pedestal.

The main thoroughfare of Kherson is Prospekt Ushakova (Ushakov Avenue), and Ploshchad Svobody (Freedom Square) lies on this street. This is the site of celebrations during national holidays. The building of the regional Soviet of People’s Deputies stands on this square as well as the cinema Ukraina and the Post Office.

The shopping centre is on Ulitsa Suvorova (Suvorov St.) which is closed to public transport.

Perekopskaya Ulitsa (Perekop St.) is on the territory of the former settlement near the Kherson fortress. This is where the officers and men of the fortress lived. A concert-film hall, Yubileyny seating 1,800 people was built here in 1970 to mark the centenary of Lenin’s birth.

The Art Museum was opened in 1978 to mark the bicentenary of Kherson. Its collection includes more than 300 works of art and it is open from 10 a. m. to 6 p. m. every day except Fridays. Admission is 20 kopecks.

While in Kherson you can make a trip to the new town of Novaya Kakhovka which is near-by and visit the Kakhovka hydro-power station on the Dnieper, see the monument to the heroes of the Civil War and the legendary horse-drawn machine-guns they used, as well as visit one of the state farms specialising in wine, where you can taste Ukrainian wines.