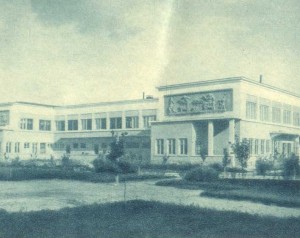 The city’s territory has increased sevenfold and its populat’on has been doubled, having long over-stepped the half million mark. Passengers pour into the town from the railway stations and landing stages and are swallowed up by the new hotels, where comfortable accommodation is afforded them. Of these hotels the new Intourist hotel is worth special mention.
The intellectual growth of the city has been amazing. The last few years have witnessed the construction of dozens of higher, secondary and elementary schools. New buildings for the Communications Centre, the Institute of Water Transport Engineers and the Industrial Institute etc. have been created. Two houses of culture have been opened. The building of the “Pushkin” Opera House has been rebuilt. The new socialist essence of all these cultural establishments presents a striking contrast to the fusty “educational institutions” of the old days. The city formerly did not possess a single higher educational institution. To-day Nizhniy-Novgorod has a dozen universities with splendid laboratories. Thousands of students, future engineers, doctors and teachers, study in the spacious auditoriums. The industrial city is receiving constant reinforcements in the way of qualified specialists.
Nizhniy-Novgorod now has seven theatres, the Dramatic, Opera and ballet Theater, the Youthful Spectators’ theater and others Before the Revolution the town had only one theater. Thirty six clubs and ten houses of culture and education are ever open for the leisure of the city’s inhabitants. 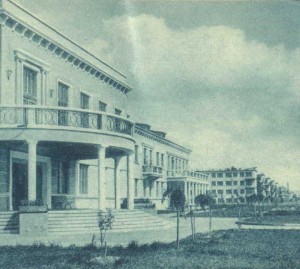 Hundreds of children spend their leisure time in the Pioneers’ Palace, where all kinds of games, child theatricals, a gymnasium hall, library, cinema, elc. are at the free disposal of little visitors.
The children spend their summer holidays in the pioneer camps outside the town.
Previously the town did not boast a single museum, not mentioning a cabinet of curiosities housed in one of the Kremlin towers. To-day Nizhniy-Novgorod has five museums. Of special interest is the Historico-Revolutionary Museum, containing some very important documents dating from the thirteenth to the eighteenth centuries illustrative of the town’s history. The museum also contains exhibits and materials depicting the history of the revolutionary movement.