Reproduction of the portrait “Emperor Alexander II is a liberator of the Christians in the East”.
A cheap popular prim. Chromolithograph.
The Museum of the Russian Literature Institute in Saint Petersburg.

Alexander II is Emperor of Russia. His reign was marked by a number of reforms which touched on nearly all units of state power, major cultural and scientific achievements, economic and financial developments, great success in foreign policy. The most significant of the reforms introduced by Alexander II was the Emancipation Edict declared on February 19, 1861, which freed serfs and gave the right of free dispose of their possessions. People gave Emperor a title – the Liberator for abolishing serfdom m Russia. 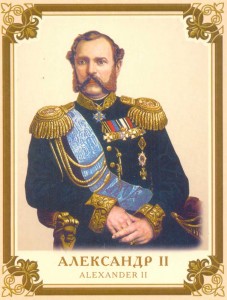 June 1, 2011
Tags: A cheap popular primChromolithographEmperor Alexander II is a liberator of the Christians in the EastReproduction of the portraitThe Museum of the Russian Literature Institute in Saint Petersburg