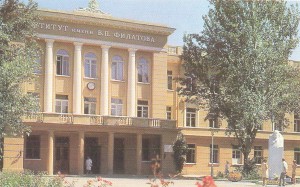 House No. 49/51 on the right-hand side of the street belongs to the Odessa Research Institute of Eye Dis­eases and Tissue Therapy founded in 1936. It bears the name of Academician Vladimir Filatov (1875-1956), the eminent Soviet ophthalmologist, known as a great fighter against blindness by his grateful patients from many countries. He developed and introduced the new method of transplanting the cornea in cases of leucoma, and also the new method of tissue therapy by inventing the method of autotransplantation of the skin. The people of Odessa always regarded Filatov with great respect and affection and to this day many a legend is told about him. A street in the city has been named after him, and his study in the Institute has been turned into a museum. A monument to the scientist sculpted by A. Kovalev has been erected outside the main building of the Institute.

After Filatov’s death in 1956, the Institute was headed by his pupil Academician Nadezhda Puchkovskaya. Filatov’s ideas, the spirit of his scientific teachings, his belief that it is necessary to fight for every drop of light remaining to the patient, lives on in his pupils. They have developed entirely new method of diagnosis, and new methods for surgical and medicinal treatment of fresh burns of the eyes, and make full use of the

prosthetic treatment of the cornea, which preserves the sight of patients who in the past would have been doomed to blindness. They have found ways of surmounting tissue incompatibility when transplanting  the  cornea  which  increases the effectivity of the operation, and they use ultrasonic methods of diagnosing and treating a number of eye diseases. Doctors of the Institute, working in collaboration with physicists, were the first in the Soviet Union to use laser ophthalmo-coagulators for treating certain types of retinal detachment, eye tumours and certain vascular disorders of the retina.

Each year the Institute treats about 100,000 patients, who come from all parts of the Soviet Union and forty-two other countries. Up to 7,000 operations are performed each year. The Institute occupies a territory of five hectares, which have been turned into a park.

Further down the Boulevard, on the left-hand side are the University buildings. The Biology and Geology-Geographical departments stand well-back from the street. The windows of seven auditoriums face the Boulevard. They belong to the Law, Philology, and Romance and Germanic Philology departments.

On the right-hand side of the Boulevard are some white gates with lion sculptures on either side of them and in the yard a modern building with ceramic orange facings. This is one of the oldest film studios in the country, the Odessa studios founded in 1916.

During the war everything was destroyed. The reconstruction of the studios was completed in 1954 and a new building added in 1973. The studios produce twenty to twenty-five full-length feature, TV films and documentaries a year.