The Historical Centre of the City

The Historical Centre of the Odessa 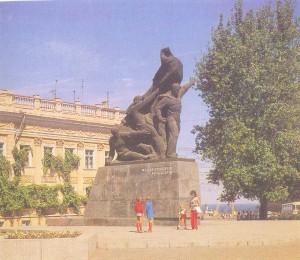 Time: from one to one and a half hours, this does not include visits to the museums.

This route takes us around a smaller circle which is within the larger circle of the first route.

The route begins on Ploshchad Potemkintsev (the Square of the Potemkin Sailors) which is next to the Promenade near the Potemkin stairway and links that boulevard with Ulitsa Catherine (Catherine st.). The main feature of the square is the memorial to the Potemkin sailors (sculptor V. Bogdanov, and architects M. Volkov and Yu. Lapin) unveiled in 1965, on the 60th anniversary of the uprising on the battleship Knyaz Potemkin-Tavrichesky. The memorial captures the first moment of the uprising when the commanding officers gave orders to shoot the group of sailors for attempted mutiny. This served as the signal for an all-out uprising, and the sailors tore off the shroud which had covered their heads before being shot as if throwing off the yoke of tsarism.

The bronze figures stand on a high granite pedestal, which bears Lenin’s words: “The Battleship Potemkin remains an unconquered territory of the revolution” and just below: “To the sailors of the Potemkin from their descendants”.

Walking in the direction of the sea, we turn to the right to the Most Sabaneyeva (Sabaneyev Bridge). To the left of the bridge is a monumental building with white Doric columns, this is the Music Boarding School named after Professor Stolyarsky. It was the first music school for children founded in the country in 1936 by the eminent music teacher, Professor Pyotr Stolyarsky.

At present the school has more than four hundred pupils. All in all Odessa has fourteen music schools and holds a leading place in the country in this field. The best pupils continue their education at the Conservatoire named after the singer Antonina Nezhda-nova (63 Ulitsa Ostrovidova). The Conservatoire has produced many talented singers and musicians, and their names are inscribed on a marble plaque in the concert hall. They include the violinist David  Oistrach, the pianist Emil Gilels, the singers Yelizaveta Chavdar, Bella Rudenko and others.

Most Sabaneyeva (Sabaneyev Bridge) just beyond the music school is one of the many in Odessa and a distinctive feature of the city. Although the city was built on a fairly level plateau, it was crisscrossed by numerous gullies, and the bridges link the different districts of the city and also individual streets.

The three-arched stone bridge was built by the engineer Alexei Kazarinov in 1831 (restored in 1866). General Ivan Sabaneyev, who had fought in the 1812 Patriotic War, lived nearby at that time, so the bridge began to be known by his name. From the bridge you get a good view of Ulitsa Khalturina (Khalturin St.) on your left and Spusk Jany Lyaburb (Jeanne Labourbe Slope) on the right, which follows the course of the former gully.

Pereulok Mendeleyeva (Mendeleyev Lane) which continues after the bridge has a number of fine buildings dating back to the end of the last century. Special mention should be made of a group built in 1830-1897. At first there was just one house with very fine rooms built by an unknown architect in 1830. Then in 1897 a two-storey building was added, designed by F. Felner and G. Gelmer and built under the guidance of the Odessa architect Herman She’vrembrandt. Its facade copies the style of the Italian barocco. There is also a garden surrounded by cast iron railings on a high stone socle.

The interior of this palatial building is rich in decoration and very elegant. Restoration work carried out in 1975 renovated its initial beauty.

August 2, 2011
Tags: The Historical Centre of the City