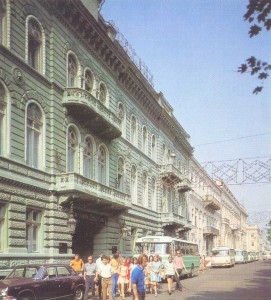 The Hotel Odessa which can accommodate a hundred and fifty visitors. Built in 1893, its architect Yuri Dmitrenko took pains to make it blend with the general ensemble of the boulevard. The entrance takes the form of an open loggia. The facade is in the style of the early Renaissance, with three vertical projections and balconies on the two top storeys. The windows of the upper storeys have arrow-shaped frames. The entrance hall is decorated with double Ionic columns of red marble with gilded capitals, and a white marble staircase leads to the upper floors, its banisters decorated with bronze sculptures. The summer restaurant, shaded by three huge plane trees in the inner courtyard is a favourite spot with visitors for a drink in the summer. The Odessa is considered the best hotel in the city and it is run by the Odessa Department of the Intourist Travel Agency. 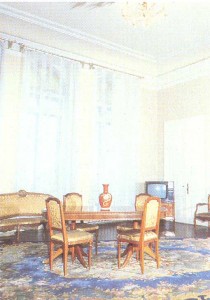 Those who like quiet and solitude can take a stroll in the park on the slopes and explore the majestic artificial cave. During the time when the paths led right down to the sea this bit of coastline was known as Swimmers’ Beach.