The Museum of the City Defence. 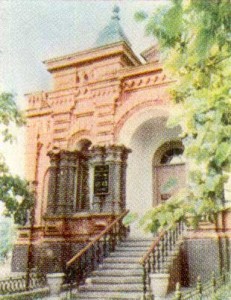 The name of this city sounds throughout the world as a symbol of staunchness, epic courage, heroism and velour of the soldiers who saved their country from enslavement.
Ages will pass, but the glorious deeds of the heroes who fought against Hitler’s hordes on tile hanks of the great Russian river will live in the memory of the generations to come.
In the battle on the Volga the Russian soldiers upheld not only their country but the whole world from the fascist enslavers. The victory at the walls of the Volga fortress spelt a turning point in the course of World War II.
The grateful mankind paid generous tribute to the Russian people for its unexampled feat on the Volga. There is hardly a city more popular abroad than Volgograd. Peoples in all the corners of the globe know it and remember it.
Scores and hundreds of factories, plants, schools, cultural institutions, streets and squares are named after it not only in the Russia, but also in Poland, Czechoslovakia, Bulgaria, France, the Germany and other countries.
As a token of profound respect for and gratitude to the heroic defenders of the city who accomplished a greatest feat in the years of the war, the grateful peoples of many countries of the world, industrial enterprises and cities of the Soviet Union and individuals send numerous presents to Volgograd which are on display at the City Defence Museum.
Representatives of many people’s come to Volgograd every year to pay tribute of respect to the immortal feat of those who had selflessly fought here for the freedom and happiness of the entire mankind and lo see the heroic city which arose, Phoemx-like from ruins and ashes.