The Musical Comedy Theatre and on the left you will see the theatre itself (3, St. Chizhikova) – a new modern building completed in 1981. It is worth going to take a closer look. It was designed by architect G.Topuz and engineer A. Lyubovsky. At the entrance there is a sculpture of a girl with a lyre in her hands sitting on a dolphin, while in a small square in front there is a fountain. 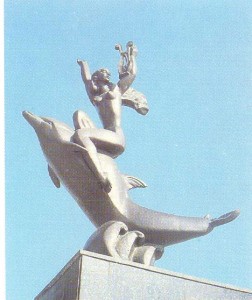 The building leaves an impression of radiance and the combination of light-coloured walls with wide strips of polished glass produces a feeling of airiness. Natural stone such as rose shell limestone, red marble, black granite, and travertin were used both inside and out. The highest part of the building which incorporates the stage is decorated with golden pylons emphasising the overall effect of splendour. 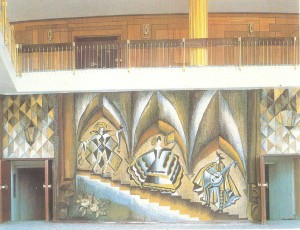 The western part of the building, housing the auxiliary premises, is encircled by bars of anodic aluminium, which serve two purposes, they offer protection from the sun and provide an additional architectural element. The lower foyer with its walls of polished glass and vast mirrors gives the impression of being a continuation of the square in front of the theatre. The numerous chandeliers are reflected in the black granite floor, and twin stairs lead to the upper foyer.

Its main decoration is a vast (180 sq. m) gobelin in muted tones which depicts theatrical scenes. From the upper foyer the audience can spill out onto the balconies in the summer and walk down two side-stairs to the square. The theatre seats 1,350 and also has a smaller hall for 300 where concerts and experimental productions are held.

The Musical Comedy Theatre company was formed in Lvov in 1947 and moved to Odessa in 1964 where it quickly won the affection of the public. Its repertoire includes the classical operettas of Kallman, Lehar, Strauss and Offenbach, as well as Soviet operettas, musical shows on modern themes and productions for children.

The theatre faces Ulitsa Belinskogo (Belinsky St.) which is a continuation of Proletarsky

Bulvar and leads to the Shevchenko Park.

Proletarsky Bulvar, as you probably noticed, has along it a great many sanatoria, and just two blocks away on the corner of Ulitsa Belinsk-ogo and Lermontovsky Pereulok (Lermontov Lane) is the Research Institute studying Health Resorts (6, Lermontovsky Pereulok). It focuses on the curative properties of the sea and the limans, the physico-chemical and microbiological properties of the liman mud, and their effect on the human organism, the thermal, sea and mineral waters on the territory of the republic and their application for treatment, as well as weighing the feasibility of building new holiday homes.

The Institute uses as its base Lermontov sanatorium (2, Lermontovsky Pereulok) which stands on a high plateau overlooking the sea. This sanatorium was founded in 1913 as a small private convalescence home. It was nationalised shortly after the Socialist Revolution when Lenin signed the decree nationalising all health resorts and sanatoria.

In Soviet years the Lermontov resort has been constantly improved. Today it enjoys country-wide fame as a place with modern medical equipment and a rich arsenal of natural and man-made curative factors.   Favourable climatic conditions, the nearness of the sea and medicinal muds, the facilities for seawater, sulphur and other baths, modern electro-physiotherapeutic facilities, and special diets and psychotherapy are all fully utilised to boost the health of people coming from all over the country.

At this point we end our fourth sight-seeing trip. From the Musical Comedy Theatre it will take only five minutes on the No. 5 tram to return to the Railway Station Square where this trip started.