The Partisan Museum in the Catacombs

The museum is in the suburban village of Nerubayskoye-thirty minutes by bus or car. 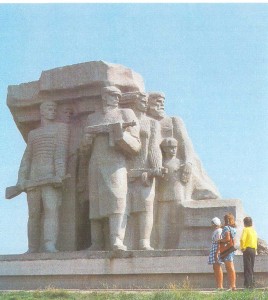 A visit to the museum with a guide can be arranged through the Service Bureau of your hotel and would take three hours, including the journey there and back.

The village of Nerubayskoye was founded at the end of the 18th century by the Black Sea Cossacks who took part in the 1787-1791 Russo-Turkish war and stormed the Turkish Fortress Yeni-Dunya.

A deep gully cuts across the village and it is on its slopes that the various entrances to the catacombs are situated. The bus takes you right up to the gully, and over one of the entrances is a marble memorial board with the inscription,

“It was here, in the catacombs of the village of Neru-bayskoye, that the partisan unit commanded by Hero of the Soviet Union V. A. Molodtsov-Badayev, which operated successfully behind enemy lines, had its underground camp.”

The defence of Odessa line passed through the village of Nerubayskoye in 1941, and it was from these catacombs that on the very first day of the enemy’s occupation of Odessa a blow was dealt to nazi invaders. A memorial complex was created in honour of the partisans’ glorious feat.

The complex consists of the sculptural group “People’s Avengers”, a 12 metre obelisk and the Partisan Museum, for which a special building was built.

The sculptural group “People’s Avengers” represents the six symbolic figures of those who joined the partisans, a sailor, a worker, a YCL member, a woman, an old man and a teenager. 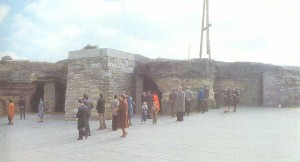 The inscription on the stele reads,

“The darkness of the catacombs

And the black nights of Odessa

You illumined by your hearts.

To the glory of Victory

The museum stands near to the memorial and has an interesting history. In 1965 a special group of YCL members and youngsters “Poisk” (Search) was organised to study the catacombs with special emphasis on the two periods when they played an important part in the history of Odessa, the Revolution and the Great Patriotic War. The group found many documents, weapons, and articles used by the partisans. On their initiative and with full public support the museum was organised and opened on May 9th, 1969.

There are three above-ground sections in the museum building. The first deals with the revolutionary past. At the beginning of the 19th century the catacombs were used to store Marxist literature reaching Russia from abroad which was then circulated in the southern regions. They were also the site for workers’ meetings, and the place where workers’ units were formed during the 1905 revolution. This section also describes the workers’ struggle during the battle for Soviet government, the underground print-shops and the events of the Civil War. 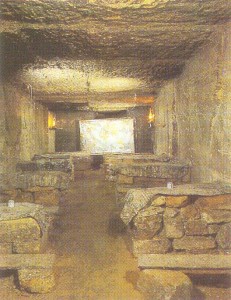 The second section deals with the heroic seventy-three day defence of Odessa in 1941, when the population of the city and the neighbouring villages used the catacombs as bomb shelters. 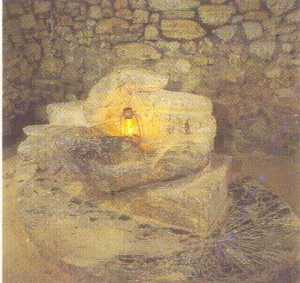 The third section deals with the underground struggle and the partisan movement in the years of Odessa’s occupation. A special place goes to the history of the partisan subversive-intelligence unit led by V. Molodtsov (Badayev).

A former miner, Vladimir Molodtsov (Badayev) was sent to Odessa from Moscow in July, 1941, with the special assignment of organising a unit for the collection of intelligence information and also for conducting subversive operations. He used his wife’s maiden name (Badayev) as a cover.

His unit consisted of seventy people, divided into two groups. One group made the catacombs their headquarters, while the other, with the assignment of collecting information, remained in the city at secret addresses.

In the museum you will see photographs of V. Molodtsov, Konstantin Zelinsky (the Party secretary of the unit), the commander of the explosives unit Ivan Ivanov and his wife Galina Martsyshek, who acted as a courier, 16-year old Yasha Gordiyenko who led the youth group and also other heroes.

Despite the extremely difficult conditions the unit operated successfully. It was responsible for many a bold act of sabotage on the railways and in the town, and it collected valuable information that was relayed to Moscow by radio.

The nazi invaders used everything at their disposal to capture and destroy the partisans; they mined and sealed up the entrances to the catacombs and spread poisoned gases, but the partisans, despite their losses, continued their   struggle, each time finding a way out.

In February, 1942, the nazis, using the services of a traitor, arrested the commander of the partisans V. Molodtsov, Yasha Gordiyenko and others when they were at a secret address in the city. They all were put to death, but none betrayed their comrades who remained in the city and the catacombs.

Having lost their commander, the partisans after a long search joined up with another unit and continued their struggle.

V. Molodtsov, K. Zelinsky and Yasha Gordiyenko are buried in the Alleya Slavy (Alley of Glory) in the Shevchenko Park.

Many of the exhibits of this section such as weapons, a typewriter, a radio receiver, leaflets, forged passes, and various articles used by the partisans were found by the youth group “Poisk” during its expeditions to the catacombs.

A spiral stairway leads from the museum building above-ground to the catacombs through the entrance of the main shaft, the one used by the partisans.

Visitors are supplied with candles as they enter the catacombs, they are led by their guide and interpreter and the group leader brings up the rear. WARNING: DO NOT ENTER THE CATACOMB WITHOUT AN EXPERIENCED GUIDE. It is very easy to get lost in the labyrinth of corridors.

What are the catacombs and how did they originate? They are subterranean galleries formed by the removal of stone. The origin of the Odessa catacombs is explained as follows. Millions of years ago, the entire territory of what is now the Black Sea steppes formed part of the seabed, on which with the passage of time the shells of molluscs coagulated into a form of light yellow shell rock. If you pick up a piece and examine it closely you will see that it does indeed consist of tiny shells the like of which are to be found in plenty on the beaches.

This stone is an excellent building material and has been used as such from times immemorial. It is light, fairly strong, easily sawed and can be used for three- to four-storey buildings. Nearly the entire old part of Odessa is built from such stone.

The catacombs are the galleries of old quarries from which the shell rock was extracted. They go down several storeys and are at different depths. Their total length has been estimated as something between 1,400 and 2,000 kilometres.

There are also natural karst caves under the city, but they are few in number and have no exit, and the only way to reach them is through the underground quarries. Many of the caves are of great scientific interest, since animal bones dating back to the Quaternary period were found in them. They are now kept as a paleontological national park.

Down in the catacombs the first thing that strikes you is the absolute darkness, the intense humidity and the profound silence. The temperature remains practically the same winter and summer alike, about ten degrees Centigrade. By candle-light tourists inspect the partisans’ underground camp, nearly all of which was recreated by enthusiasts. There are the staff headquarters, the living premises, the stocks of weapons and ammunition, the workshops, the bakery, kitchen, shower room, facilities for drying clothes and footwear, the well from which drinking water was obtained, the grinder for making flour, and the shooting gallery.

The main base of the Bada-yev unit was several kilometres away, but some of the premises have remained intact from the war days, such as the guard room, the No. 1 sentry

post guarding the entrance where battle with the nazis was waged, the barricade at which the partisans stopped the invaders and then after two days of fighting threw the nazi soldiers out of the catacombs, the well which served the partisans as a means of communication with their surface agents (the messages were placed into buckets that were then filled with water and pulled to the top), and the classroom where the children forced to take refuge in the catacombs during the siege of the city could continue their schooling. Everything in the classroom was hewn out of shell rock including the benches on which the children sat, and the desks they worked at using kerosene lamps for lighting. One can see drawings made by the partisans on the stone, these have been transferred from various parts of the catacombs.

Outside sentry post No. 1 an eternal flame of Partisan Glory burns, a burner held gently by a hand hewn from stone. You will always find flowers at the flame and on the wall there is a picture of the partisans and a bas-relief of A Grieving Mother.

A visit to the Museum helps to understand the atmosphere of the Soviet people’s heroic struggle and their refusal to yield to the enemy in the difficult years of occupation.