The rare photo of clergy with members of household in a cover. Russia, 1928. 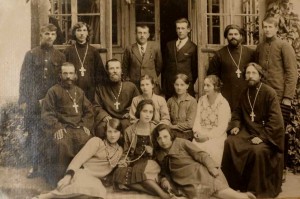 Priest George Sadovsky is shot by People’s Commissariat for Internal Affairs on December 22, 1937, canonized in an assembly of New martyrs Russian.

Priest George Sadovsky on December 19, 1937 in the indictment in the matter of Sadovsky it was told: «Sadovsky George Avramovich, being on service the priest in Yasskovsky church, during preparation of elections to the Supreme Council of the USSR among the population carried out counterrevolutionary propaganda against Sovvlasti and carried out the work directed to failure of elections …», – and the decision on business transfer on consideration of the Judicial Three is passed at UNKVD across Odessa region.

On December 22, 1937 the Judicial Three at УНКВД across Odessa region passed the decision on execution of the accused. On December 27, 1937 priest George Sadovsky was shot. It is rehabilitated on September 6, 1989. On memoirs of the daughter of father George, Claudia Georgiyevna, the priest seldom removed a cassock and a cross, and even when went out of doors and heard rough words concerning its svyashchennichesky clothes and a beard, that, having crossed, spoke to the children «that will be, will be, and a cross shrine from itself I will not remove».

Autumn of 1922, dozens of the leading figures of Russian culture, philosophy and science were expelled from the country on board the steamer «Oberbürgermeister Haken»
May 31, 2013

The decision of the State Council to refuse the application faithful to open in 1947, the Alexander Nevsky church. TSFNO.
April 30, 2013
Go to Top