The war in Odessa 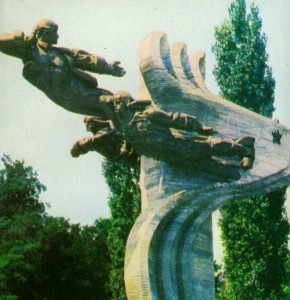 Then came March, 1944, when Soviet forces were moving indomitably to the West. After the defeat at Stalingrad and then on the Kursk Salient, the German troops were rolling back. They still made attempts to launch the odd counter-offensive, but the days of Hitler’s fascism were nearly over.
The job of liberating Odessa fell to the 3rd Ukrainian Front commanded by the General of the Army, Rodion Malinovsky, who had himself been born in Odessa.
The operation to liberate the city began on March 24th. Troops of the 3rd Ukrainian Front smashed large enemy forces and in the morning of April 9th reached the line from which the storming of Odessa was about to begin. The soldiers knew that the nazis would fight to the last, because they could only retreat into the sea. The soldiers also knew that all the best buildings in the city, schools, hospitals, theaters, factories and port installations had been mined, and that the invaders were continuing to plunder and shoot the population. The nazis intended, if faced with the prospect of defeat, to destroy
the city and its population, turning Odessa into a wasteland. The Soviet Command therefore decided to take the city without any preliminary artillery shelling and without bombardment from the air, so as to preserve it.
The partisans proved of great help to the attacking armies. They came out of the catacombs, engaged the enemy in battle, and destroyed the groups sent to blow up the city. The partisans were able to prevent the blowing up of the dam across the Khadjibey Liman and thus saved a large part of the city, the Peresyp district, from flooding. They also prevented the blasting of the port, Scientists’ Club, Science Library, Opera and other buildings and installations, and cut off the road of retreat for the nazis.
By the morning of April 10th the city had been cleared of enemy troops. That same day Moscow, according to the war-time tradition, saluted the troops that had liberated Odessa with twenty-four volleys fired from three hundred and twenty four artillery guns, and twenty-seven military units were named the Odessa units.
The liberation of Odessa was of great military and political significance. An important railway junction and sea port were returned to the country, and the Black Sea Fleet was able to strike out against enemy communication lines and. ports. Soviet troops could now begin to help the people of Bulgaria, Romania and Yugoslavia to rid themselves of nazi occupation.
The rapidity with which the invaders were pushed out of Odessa foiled their plans for destroying the city, but they had badly damaged the port, many factories, schools, libraries and homes. The waterworks and power station had been destroyed and the total damage inflicted on Odessa was estimated at more than 2,500 million roubles (in the prices of those days). More than a quarter of a million people, 280,000, lost their lives in the Odessa region during the nazi occupation.
Odessa honours the memory of those who defended it in 1941, those who fought the enemy during the years of occupation, and those who liberated it in 1944.
The courageous fight put up by the defenders of Odessa, like those of the other hero-cities, helped the Soviet Army to foil Hitler’s plans for a blitz war and build up the necessary reserves for the subsequent offensives which led to the rout of the nazi armies on the Soviet-German front, and the liberation of Eastern and Central Europe.
The country honoured the defenders and people of Odessa with the institution of a special medal “For the Defence of Odessa”. The city itself was awarded the title of hero-city and the highest Soviet decoration, the Order of Lenin and the “Gold Star” medal, for its outstanding services to the country, and for the courage and heroism displayed by the troops and the population in combatting the nazi invaders.
Today a 60-km-long Green Belt of Glory has been created along what had been the main line of defence in 1941, with obelisks, stelae, sculptural groups and memorial mounds marking the main battlefields.