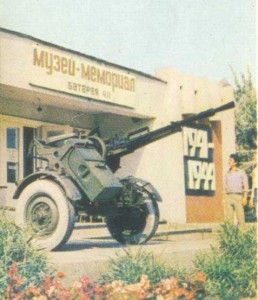 The fascist armies entered the city left by the Soviet forces towards the evening of October 16th and the dark days of occupation began.
Right from the start the occupation authorities issued orders depriving the local population of all civil rights. They were forbidden to leave their homes without special passes, a night curfew was imposed, they were forbidden to keep Soviet printed books, were not allowed to sing Russian and Ukrainian songs, and so on. Spies and agents were busy seeking out communists and members of the underground. Gallows appeared in the streets and squares, and thousands of people were sent to the concentration camps set up in the region.
A regime of terror and violence reigned in occupied Odessa, but no atrocities, no threats could deter the people’s determination to resist the occupation. From the first to the last day the invaders were subjected to frequent partisan attacks and suffered heavy losses.
There are no forests around Odessa, and no hills. The only place where the partisans could hide were the catacombs, a vast underground labyrinth of corridors, several storeys high, stretching for 2,000 km. These catacombs became an underground city. To spend even a short time in the catacombs is difficult, yet the partisans lived there and also carried out their raids.
There were five partisan units and forty-five underground patriotic groups operating in Odessa and its environs. Before the evacuation an underground party regional committee was formed and six district committees, to guide the struggle against the invaders. About 6,000 people operated in the underground.
The partisans killed more than 3,000 occupants, derailed thirty-two trains carrying enemy soldiers and military equipment, and they saved thousands of people from death and from being sent to Germany as slave labourers. Their activities forced the invaders to keep 16,000 officers and men in the town and surrounding villages, thereby preventing them from taking other duties.
The most successful partisan units were those commanded by Vladimir Molodtsov (Badayev), Vasili Avdeyev-Chernomorsky and Nikolai Geft.
Molodtsov’s unit was based in the catacombs of the nearby village of Nerubayskoye, where premises had been equipped as living quarters, staff headquarters, bakery, sauna, dining hall, kitchen and even a club room. There were also wells which supplied drinking water. This unit collected military and political information about the enemy, distributed anti-fascist leaflets and Sovinformbureau reports on the situation at the fronts, destroyed enemy forces and their weapons, and derailed military trains.
On May 9th, 1969, a Memorial Partisan Museum was opened in Nerubayskoye catacombs. Each year more than one million people make a pilgrimage to the museum (more information can be found in the description of the bus trip to the Memorial Partisan Museum).
Vasili Avdeyev-Chernomorsky was sent to Odessa with a small group to bring together the different partisan units and groups, to expand the struggle against the invaders, and to help Soviet troops approaching Odessa. The group accomplished its mission, but its leader was arrested and died a hero’s death.
Slovak antifascists fought side by side with Soviet partisans in the catacombs. There were about 180 soldiers from the first Slovak Division who crossed over to the partisans. One of them, Jan Pavlik, who was killed on the day of the liberation of the city, is buried in the Alleya Slavy (Alley of Glory).
Nikolai Geft’s group dealt mainly with sabotage at the ship-repair docks, and carried out a number of acts which resulted in repaired ships blowing up at sea. Nikolai Geft was killed in Poland in 1944.
Other partisan units and underground patriotic groups also fought courageously against the invaders.