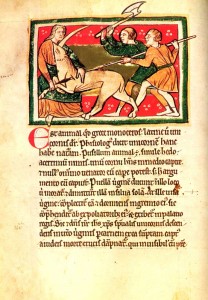 Unicorn /unicornis, monoceros, rinoceros/
9.8X6.6 cm
“Unicorn is the best of all animals” says an old Russian song about the Dove’s Book. Indeed, the unicorn is most popular in the fantastic animal world; he has undergone all sorts of transformations during his legendary history. It is the most poetical image in the bestiary perceived by the new epoch as a symbol of purity and feminine chastity. The image always attracted poets and left a conspicuous trace in new European literature.
The first mention of the unicorn known to us is to be found in “Indica” by Ctesias in the fifth century B.C. Describing the unicorn as an animal of tremendous ferocity, inimical toward the elephant, antique writers — Pliny /VIII.20.29, VIII. 21.31/, Solinus /52. 39.40/, Aelian /111.41; IV.52; XVI.20; XVII.44/ — obviously meant the Indian or the African rhinoceros. The animal’s strength and swiftness of movement are emphasised in the texts of the Old Testament /Numbers, 23:22; Job, 39:9—11 and others/. A different image of a unicorn, one of a poetical legend and obviously very distantly related to the Christian tradition, was created in the early Christian literature: in “Physi-ologus” and in the commentaries to “Hexaemeron” by Basil the Great, which are ascribed to Eustace of Antioch /Patrologia Graeca, XVII, col.744/. The image seems to carry the flavour of an ancient oriental fable with a smack of ancient phallic symbolism. The unicorn in “Physiologus” is small like a kid and has a single horn on his forehead. He is wild and strong and no hunter can approach him. The only way to seize him is to bring a young girl to the forest and leave her there all by herself. Attracted by the girl’s virgin chastity, the unicorn will approach her and fall asleep on her breast. Thus, he gets easily caught. This story reappears with minor alterations in all the Latin versions of “Physiologus”. It is found in bestiaries, in the treatise of Pseudo-Hugh /II.6/ and Pierre of Beauvais /11.220/. It is also preserved in writings by Albert the Great /XXII.I.106/, Isidor /XII.II.12.13/; and in the fourteenth century Brunetto Latini /I.V.201/ treated the unicorn and rhinoceros as one and the same animal. He included into his story an episode of the unicorn’s fight with the elephant derived from antique writers.
The Saint Petersburg Bestiary has one chapter devoted to the unicorn, in which the animal is called, after Isidor’s usual fashion, now “unicornis”, now “monoceros”. It is completed by a few lines about a “rinoceros” where mention is made of the fight between a rhinoceros and an elephant. The tale of the unicorn was given a refined poetical interpretation in the bestiaries of Philippe de Thatin /393—418/, Hervasius /239—264/, Guillaume le Clerc /1375—1416/; it was elaborated on in a secular spirit in the anonymous “Bestiary” of Love in Verse” /1252 and further on/ and in the “Bestiary of Love” by Richard de Fournival /42.7/. In medieval literature the tale of the unicorn is often associated with the story of Jesus Christ who, born of the Virgin, was taken in custody and condemned to death. Jesus Christ is believed to be in spirit like a unicorn. The unicorn’s single horn seems to prove what he himself said “I and the Father are one”. The comparison of the maiden’s bossom to the Church, and of her kiss to God’s grace, drawn in the poetical bestiary by Phillipe de Thaiin corresponds to the interpretation of the image of Virgin Mary as a symbol of Church. The connection of the unicorn with the image of a chaste maiden and Virgin Mary quite logically brings about the transformation of the unicorn’s symbolic interpretation done in the spirit of refined courtly aesthetics of the knighthood in the late Middle Ages. The unicorn becomes the invariable companion and the loyal friend of a fair lady, one of the most romantic images of late medieval secular symbolism. The painter of the Saint Petersburg Bestiary shows the unicorn with his head on the virgin’s bossom, under the flaps of her dress, thus revealing his own literal and naive understanding of the text. The beauty and decorative finesse of the miniature illustrating the text on the unicorn, its dynamic and the unity of the figures placed on the colourful surfaces account for the repeated use of the artistic pattern of this scene in the illustrated bestiaries of the twelfth and thirteenth centures.