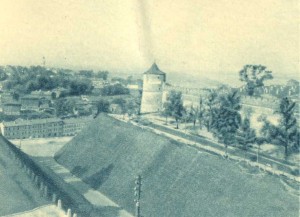 Nizhniy Novgorod
Spread out on the steep hills, at the confluence of the Oka and the Volga, lies Nizhniy Novgorod, one of the most picturesque cities in the Russia and at the same time an important industrial centre.
Standing on the deck of a Volga steamboat the visitor can glimpse Nizhniy Novgorod from far off. The town clings to the high crags above the river hank like a gigantic eyrie, the outline of the ancient Kremlin (citadel) walls and towers standing out boldly on top of the hill.
From the landing stage fine roadways wind up the steep slopes into the heart of the town. The view from the slopes over the broad Volga with its low-lying and far-spreading left bank and the wooded Mokhovy hills is very beautiful. The Mokhovy hills are a favorite spot for rambles and excursions.
In the lower part of the city, at the confluence of the two rivers, are the noisy busy harbours, the arches of enormous bridges, the suburbs of Zarechya and the buildings of great factories.
The harbours are a scene of constant activity, day and night. Motor ships, either floating sanatoriums or slim white passenger ships, moor and unmoor at the landing places.   Snorting tugs drag  enormous barges up and down stream.
In 1221, according to ancient Russian annals, a force under Yuri Vsevolodovich,  feudal prince of Suzdal,  came here and built a fort and founded a town which was named Nizhny Novgorod.
The old Kremlin walls are full of memories of the hoary past. Once upon a time they formed a stronghold against the raids of barbarian tribes. Beneath the Kremlin walls there are still the remains of ancient  underground passages.