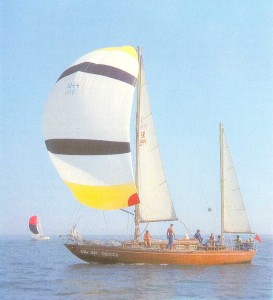 The beach, more than one kilometre long and 35-40 metres wide occupies a territory of almost 400,000 sq. m. It is excellently equipped both for adults and children. For the children there is a playground with swings, etc., and for the adults, a variety of sports facilities including basketball and volleyball courts and a football field.

From the beach you can take a boat ride to the Passenger Sea Terminal.

The excursion across the Shevchenko Park ends at this point. You can return to the centre following the main alley, or if you have the time and feel like a bit of sea air, you can walk from the park to Arkadiya (about 1.5 hours) along the coastal road, or in half that time reach the cable-way at the “Otrada” beach. This is a favorite route with the people of Odessa for an evening or Sunday stroll. The coastal road follows the contour of the coast and is closed to traffic, it passes through the park on the slopes.

From the “Komsomol” beach to the Yacht Club there are two routes; either the coastal road or along the embankment, right over the sea. A huge stone of yellow shell rock marks the border between the “Komsomol” and “Otrada” beaches.

The Yacht Club is Odessa’s oldest sports organisation, it was founded in 1875.

The Club belongs to the Black Sea Shipping Line and the yachts to the sports collectives of the various enterprises in the city. The yachts are crewed by members of these collectives. Altogether there are about 2,000 members of the Yacht Club with about 300 boats at their disposal. One of the most interesting is the yacht  Lieutenant  Schmidt, built at the beginning of the century and originally christened Mayana, it was recently restored by the cadets of Odessa’s Marine Engineering School. Many famous personalities sailed on this yacht including the Father of Soviet space vehicles Sergei Korolev, the writers Yuri Olesha and Valentin Katayev, and the poet Eduard Bagritsky.

There is a school for children attached to the club, where more than two hundred boys and girls learn the art of sailing.

Odessa yachtsmen are constant participants and organisers of major sailing regattas. The most popular is the International Druzhba regatta in which yachts from many countries of the world compete together with their counterparts from Odessa and its twin towns Varna and Constanta. This contest is always held in Odessa Bay.

Each year in mid-June Odessa yachts take part in the Varna International Regatta in memory of the great Bulgarian and international working class leader, the hero of the 1933 Leipzig trial, Georgi Dimi-trov. They also participate in the annual national regatta for the Black Sea Cup.

At one of the piers of the Yacht Club the training sailing boat Equator always stands at anchor. Opposite it is the beach terminal of the cable-way that links the coast with the Proletarsky Bulvar from where a ten minute ride on tram No. 5 will take you back to the centre of the city.

Beyond the Yacht Club the road departs from the sea, returning to it after skirting the restaurant Glechik and the Cafe Delfin where it then continues above the “Delfin” Beach to Arkadiya, not more than half an hour at an easy pace.