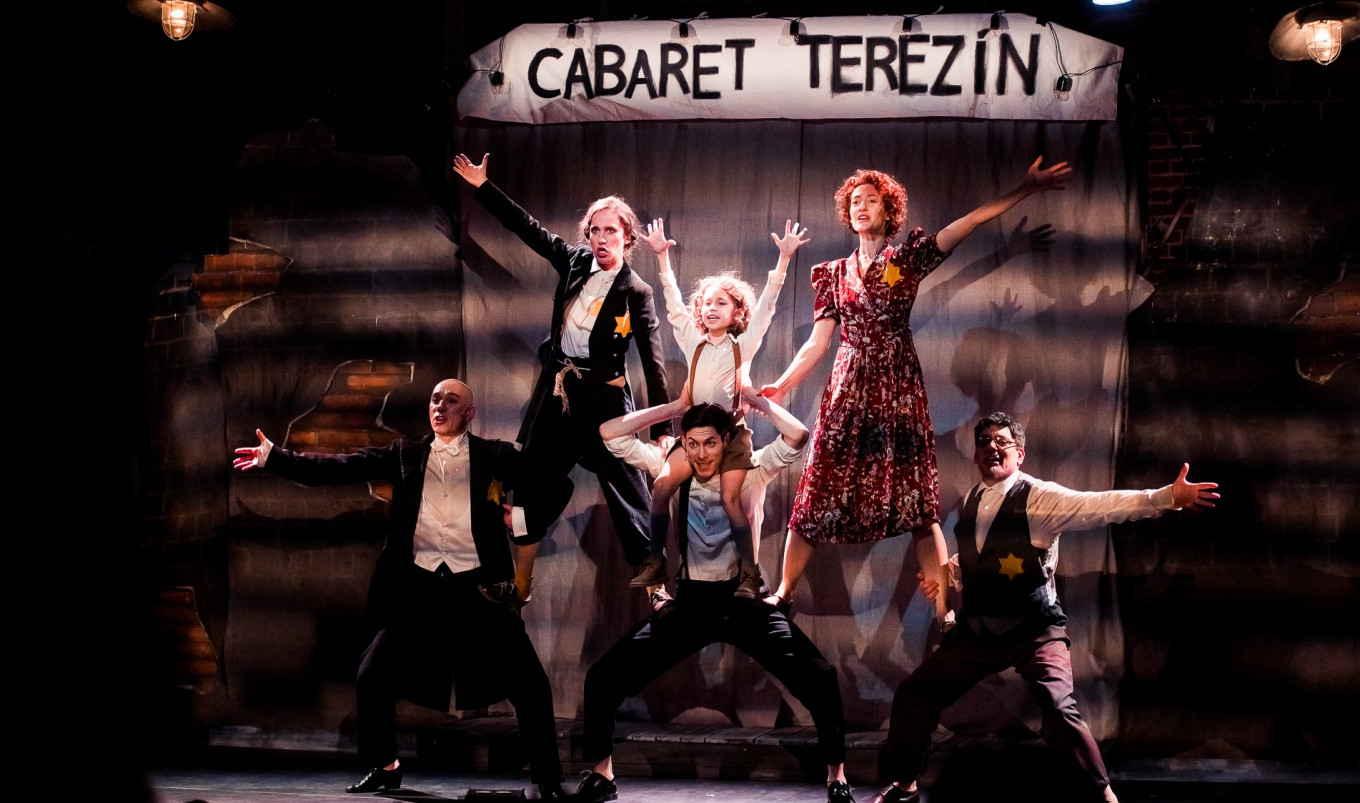 They did their best to keep spirits up by doing what they did before it happened, by writing music, singing, and dancing. By parodying their circumstances in lighthearted tunes, they could perhaps forget for a moment the death all around them.

They were the prisoners in Theresienstadt, a concentration camp in Nazi-occupied Czechoslovakia, who organized a cabaret theater. Many of the works survived in archives and have been revived in “Cabaret Terezin,” a unique work of musical theater.

The Cabaret finally made its way to Moscow for a short run with the support of the Russian Jewish Congress and the Jewish Museum and Tolerance Center.

The performance, true to its name, is a full-fledged cabaret musical, and during the performance, the audience laughed, cried, and jigged in their seats. “Cabaret Terezin” tells the story of a family, two parents and their young son, who arrive at the camp hoping that they will soon be allowed to go back home. While this doesn’t happen, they find some solace in their new acquaintances, performers who teach them new songs and dances, help them learn the ropes of life in their new surroundings, and celebrate their son’s birthday. All the songs were written by prisoners at Theresienstadt, and the characters in the play were modelled on real people.

The performance drew the most attention, and some controversy, for the lighthearted way in which ghetto life is presented. Performers sing about their “special diet that can heal anyone,” advising the newcomers to hold on to their “lively spirit, so you don’t fade away from hunger.” When Hanna, an actress, is left to babysit the young boy Tomas while his parents are working, she comes up with a game of loading stuffed dolls onto a toy train, singing a catchy tune about “time to load up the bodies.” In another song, one of the protagonist’s main problems of the day is not being able to get tickets to the camp’s sold-out theater productions.

Better to die of laughter than fear

The play’s director, Nina Chusova, found inspiration in the prisoners’ humor and their ability to use it as a defense against despair. “When anything goes wrong in our lives, we are quick to fall into depression,” she said. “But these people lived with death every day. They kept this power, this energy, that saved them, that lifted them up to a whole different level, and suddenly these regular people become Biblical figures.”

While many people cringe at the thought of joking about the Holocaust, Sergei Dreznin, the composer and artistic director of the production, is an adamant champion of the play. He has been working on the project ever since the original premiere in Vienna in 1992, and has been confronted many times about the humor. “Before the Off-Broadway premiere,” he told The Moscow Times, “I was sitting in front of the theater in my ragged coat, with a yellow star of David, and we were playing one of the numbers, and passersby shouted at us ‘Is this a joke?’ Yes, but it’s the prisoners’ joke. And as their representatives, we can allow ourselves to make the jokes that they allowed themselves to make. It’s another matter that to create this context of mortal danger and tension. You can’t create that through artistic means. And that’s why you have to keep it in mind when you’re watching.”

The audience can laugh because they are not allowed to forget the horrors that are taking place for a second. The characters in the play live in constant fear of being the next ones sent away “to the East.” While none of them says what this means, the audience knows that it is a place no one returns from.

One of the most devastating moments in the play is when the Red Cross comes to inspect the camp. The prisoners are forced to decorate the camp and entertain the inspectors, who generally have a grand time and look the other way at abuses. The prisoners had thought that they would be able to get an SOS out to the world, but they found themselves even more abandoned.

Judging by the thunderous applause at the end of Cabaret Terezin, Muscovites were able to appreciate the dark humor of the play. But more than that, perhaps, what resonates is the hope that humor cultivates, even in the darkest of circumstances. That is the message Karel Švenk, who perished in a death march two weeks before the end of the war, wrote into his song “The March of Terezin”: “Embrace each other, friends, for without humor we cannot survive / On the ruins of the ghetto we will celebrate life!”

‘Red Nail Polish’: Kirill Serebrennikov on the War in Ukraine
May 26, 2022

Exhibitions of NATO ‘Cruelty’ Open Across Russia Amid Ukraine War
May 25, 2022