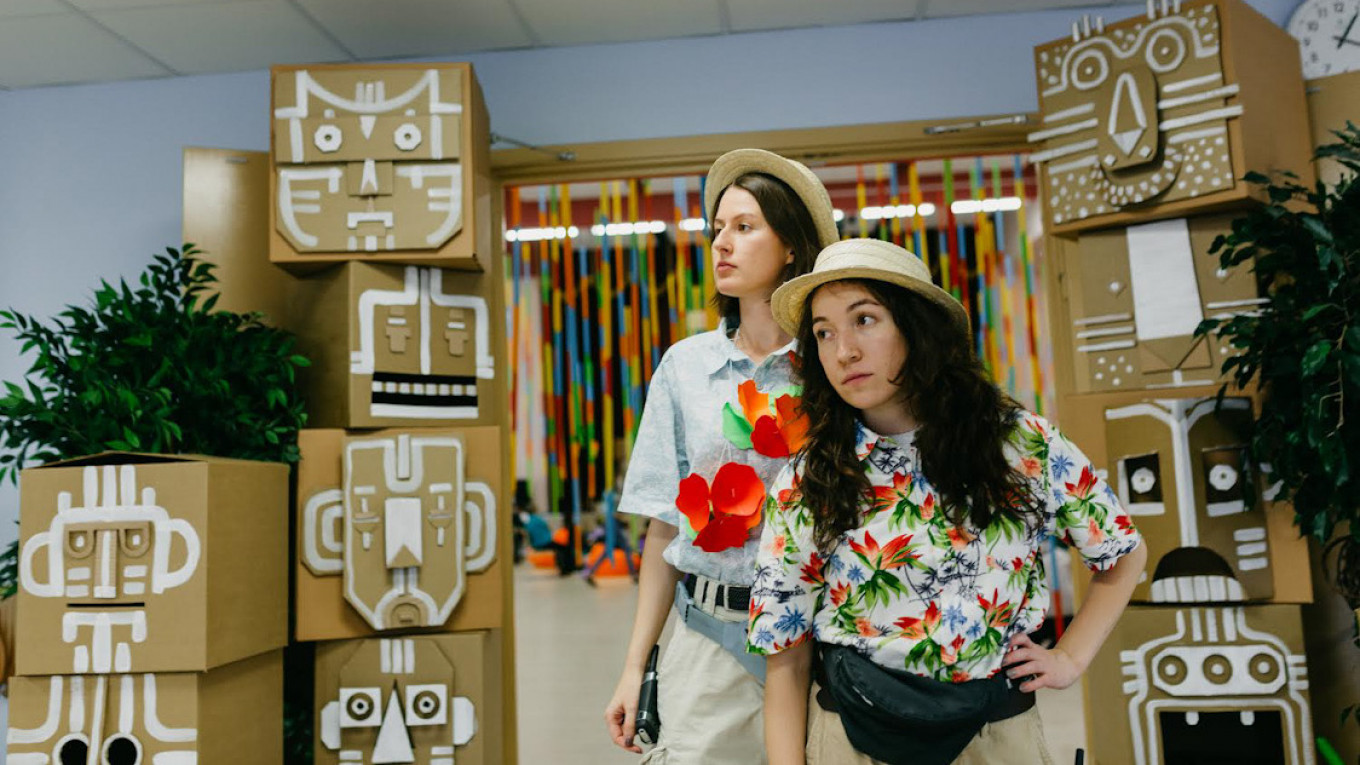 Maria Plotkina and Arina Nuriahmetova were stressed young computer science teachers battling an entrenched system of learning when they decided to set up Geek Teachers to equip school teachers across Russia with the IT skills to bring the latest education technologies to the classroom.

Four years later, their platform, which has over 13,000 online followers, has become vital during the coronavirus pandemic, giving teachers the resources, support and community they need to move classes online.

“The idea of our project was born out of a painful story of young teachers’ struggle against bureaucracy,” said Plotkina, 28, who in October was named Young Female Entrepreneur of the Year by the Youth Business International NGO.

“Our initial idea was to create a social network hub for teachers where they could learn of ways to integrate mobile apps into their lessons,” said Nuriahmetova, 28.

Plotkina had been a successful graphic designer at a private firm until she decided to quit and become a teacher. Nuriahmetova had always had ambitions to be a computer engineer when she was growing up in a small village in the republic of Udmurtia, but her university training led her to teach in a St. Petersburg high school.

The two women met there and bonded over their shared frustrations with their more experienced colleagues, who rejected their attempts to modernize teaching.

“I introduced my students to video editing, Photoshop — doing what I thought was right and fun,” Nuriahmetova said. “But my classes were regularly inspected by education commissions that said my lessons were not in compliance with the standardized curriculum.”

They brought their colleagues onboard with their idea by showing, rather than telling, and won external funding that allowed them to move all information exchange and staff meetings online.

They also ran weekly webinars on the integration of mobile apps into daily lessons and organized social events for their colleagues that to date have attracted 4,000 teachers to festivals in Moscow, St. Petersburg, Izhevsk and Vladivostok.

In 2018, they quit their jobs and founded Geek Teachers with their own savings.

“When we started, we saw Geek Teachers simply as a charity project and did not even think we could make a profitable project out of it,” said Plotkina. Nuriahmetova added that learning how to make a profit from sharing knowledge was “the most difficult” part of the project.

The second Geek Teachers festival in Izhevsk was funded by the Rybakov Foundation, a Moscow-based private philanthropic organization. After one of its representatives saw 900 attendees squeezed into a small rented venue, the fund became a permanent investor. At various stages, the project has also been supported by the Far Eastern Federal University, the Prosveshcheniye Publishing House and Moscow’s Higher School of Economics.

Today, in addition to being a virtual and physical hub for teachers, Geek Teachers offers free access to three web courses on technological innovation for educators. They have also trialled their first paid course on mobile app integration, which also offered subscribers a tailored mentorship program for 1,990 rubles ($25).

Plotkina and Nuriahmetova say that in spite of their program’s online success, meet-ups for educators remain the centerpiece of their start-up, though these have had to be put on hold during the pandemic.

“Integrating technology into the learning process is not as simple as downloading an app on your smartphone. It takes a lot of practice, requires you to completely restructure the lessons you were so used to delivering before,” she said.

Chaynikova started with creating basic pop-up quizzes on Geek Teachers before moving on to more complex digital solutions like Google’s educational services, which she says “turned out not to be difficult at all.” By the time the pandemic came, she was well-prepared to instruct her students remotely.

“I work at an ordinary school with limited resources, so teachers had to adapt to remote work on their own. We compiled every bit of knowledge received through Geek Teachers and were able to develop a methodology for remote learning lessons.”

Having thought she would leave teaching altogether after a couple of years, Chaynikova says she is now motivated to carry on.

“For us teachers, Geek Teachers is a breath of fresh air,” she said.

Valeria Zavgorodnyaya, program director at Impact Hub Moscow, an organization that offers business mentorship, said the project arrived at the right time. While many enterprises were forced to restructure their business models or suspend operations in the context of the pandemic, Geek Teachers gained a new competitive edge.

“Everyone says that Russian schools are ill-prepared for remote learning, teachers are not ready and lack the technical knowledge or the necessary equipment is absent altogether. This project solves all of these problems by filling in the gap between the advancement of educational technologies and knowledge that educators themselves possess,” Zavgorodnyaya said.

According to research conducted by the Higher School of Economics, only 64% of Russian school teachers had experience of using online learning platforms before the pandemic-forced transition to remote teaching.

Geek Teachers can be accessed by teachers in the most remote, under-equipped schools, even those with no access to the world wide web other than a single smartphone.

“We are not teaching people how to use virtual reality systems in a school environment but rather how to effectively integrate the most basic tools that require nothing more than one smartphone and that don’t even need reliable internet,” Plotkina said.

Plotkina and Nuriahmetova believe that Geek Teachers can find followers beyond their native Russia, particularly among educators in rural localities in Europe and the U.S. where they want to expand to in the near future.

“The big idea I have right now is to collaborate with a similar project in the U.S. and run a sort of an exchange program with them,” Plotkina said. “And in my experience, teachers in Russia and smaller European communities face very similar challenges — they all lack professional support and stable internet connections.”