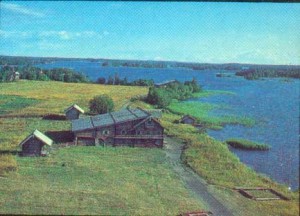 The ship will cover more than 70 kilometers up the river and reach the Ladoga Lace, with gives source to the Neva river, carrying its swift waters into the Gult of Finland. 20 kilometers away from the river terminal there’s a settlement Ust-lzhora, situated on the right bank of the river. Here in 1240 the historic battle of the army headed by the Novgorodian Prince Alexander Jaroslavovich against the Sweedish troops took place. In honour of this victory the Russian people called Prince Alexander – Alexander Nevsky. At the source of the Neva river the old Russian fortress Shlisselburg, meaning the key-city, is situated. Prerevolution the political prison was there. In the fortress, which is under restoration now, there is a museum.