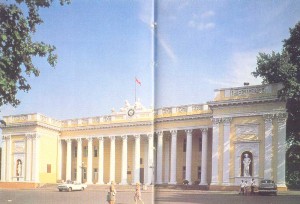 The dominating building on the square is house No. 1. It now houses the Odessa City Council of People’s Deputies. and flies the flag of the Ukraine. The building is both an architectural and historical monument. It was constructed in 1829-1834, and designed by F. Boffo in the style of Russian classicism. In 1871-1873 the architect F. Morandi redesigned it, and based on his design the building was restored from the ravages of the war. Initially the house had two wings, one at either end of the central part which formed an open courtyard separated from the square by a double line of Corinthian columns. This, however, was subsequently closed in by a wall to create a big entrance hall and other services. Later another three-storey wing facing the sea was added. 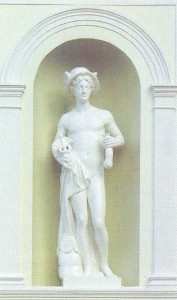 Steps the entire width of the colonnade lead up to the entrance over which is displayed the town’s coat-of-arms.

Over the balustrade stands a sculptural group, two figures, Day and Night, symbolising the passage of time. The clock on the building chimes the melody “Odessa, my town” from the favourite operetta of the people of Odessa White Acacia by the Soviet composer Isaac Dunayevsky every half hour. Alcoves in the main facade hold the figures of the Ancient Roman Goddess Ceres, the Goddess of Fertility, and Mercury, Protector of Commerce, a reminder of the initial purpose of the building. 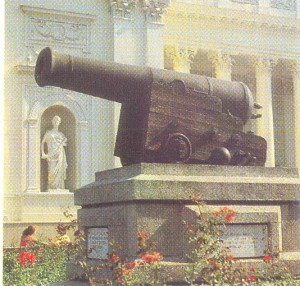 The sculptures are by the Italian sculptor Luigilorini, a member of the Garibaldi movement, who spent 42 years of his life in Odessa.

It was in this building that Soviet power was proclaimed in town on January 14th (27) 1918. A memorial plaque to the right of the entrance commemorates this event.

To the left of the City Soviet facing the sea stands an ancient cannon on a wooden gun-carriage. It was mounted on a granite pedestal in 1904 to mark the 50th anniversary of the defence of the town during the Crimean War. The inscription on the side facing the sea reads, “This cannon is a war trophy. It weighs 250 poods (4tons) and its cannon ball, 2 poods 16 pounds (38.5 kg)”. A second inscription, on the boulevard side, gives the cannon’s history. During the Crimean War, 1853-1856, when Russia battled against Turkey, the Black Sea coast of Russia was blocked by the fleet of Turkey’s allies, Britain and France. A squadron of British and French ships, thirty-two in all, sailed to Odessa on April 8th (20th), 1854, and issued an ultimatum to the local authorities which demanded the surrender of the city and of all the ships in the harbour. No answer was given to this ultimatum. At dawn on April 10th (22nd) all three hundred and fifty guns of the naval squadron opened fire on the port and town. Although the defending garrison was not very big and had only forty-eight small-calibre cannons, the allies were unable to land their forces. The defenders of Odessa replied to the enemy barrage with a barrage of their own. The battery commanded by ensign Alexander Shchegolev did particularly well and for six hours its four guns fought a duel with nine warships and forced them to move away from the coast. The squadron discontinued its barrage and moved out to sea leaving three ships to patrol the area. One of these was the British steam frigate Tiger, one of the best British naval vessels of those times. On the misty morning of April 30th (May 12th) the Tiger ran aground near Arkadiya (about 10 km south of the port) and was shelled by coastal batteries. The crew were taken prisoner and the frigate was set on fire, as the other patrolling vessels made it impossible to refloat the frigate.

A copy of the shell that hit the Richelieu monument during the barrage from the allied naval squadron was later imbedded in its pedestal.