First Russian-made experimental nuclear fuel assemblies based on accident-tolerant fuel (ATF) have been loaded for testing into the water loops of MIR research reactor at the State Research Institute of Atomic Reactors in Dimitrovgrad, Ulyanovsk Region. This work is a part of the project of TVEL Fuel Company of ROSATOM to develop Russian accident tolerant fuel resistant to severe beyond-design basis accidents, and bring it to the market.

Two experimental fuel assemblies, manufactured at Novosibirsk Chemical Concentrates Plant (a subsidiary of TVEL Fuel Company), consist either of VVER or PWR geometry fuel rods with four different combinations of cladding materials and fuel matrix. Fuel pellets are made of one of the two materials, either traditional uranium dioxide or uranium-molybdenum alloy with increased density and thermal conductivity. The fuel rods cladding is either a zirconium alloy with chromium coating or a chromium-nickel alloy. 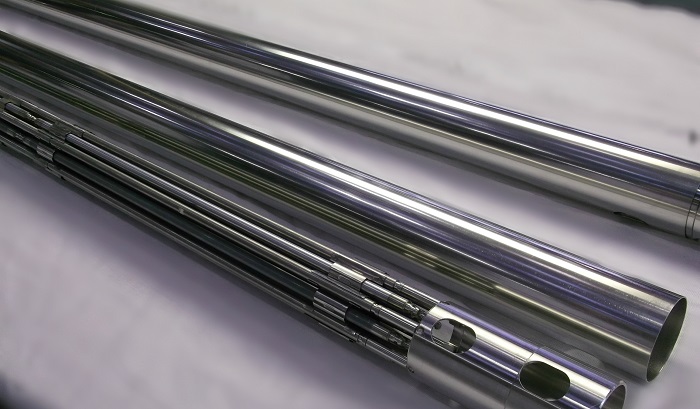 Each fuel assembly contains 24 fuel rods with different combinations of materials. Fuel assemblies are being tested in the MIR reactor under conditions as close as possible to the operational ones, including the parameters of the VVER and PWR coolant. The research reactor design enables parallel studies in separate loops, which is especially important given the simultaneous fuel testing for reactors of Russian and foreign design.

“The fabrication of the first accident tolerant fuel followed the large-scale work of scientists and design engineers of ROSATOM’s fuel unit, including in-depth materials research, introduction of new coating technologies and resistance butt-welding, and successful laboratory testing of the samples. Besides the research analysis, the choice of materials was based on the long-time experience of the Russian nuclear industry, considering that some of the materials are successfully used for research reactor nuclear fuels or the core of power and propulsion reactors,” Alexander Ugryumov, Vice President for Research and Development at TVEL JSC, commented.

The first phase of the reactor tests and post-reactor studies of ATF will be completed in 2019. Based on the data obtained, it will be necessary to select the optimal combination of cladding materials, calculate and validate the neutron-physical characteristics of light water reactors cores. The next important stage includes loading experimental fuel assemblies with some ATF fuel rods into a commercial power reactor in Russia.

ATF is nuclear fuel resistant to severe beyond-design basis accidents at NPPs with the loss of coolant in the reactor. Even in case of heat removal failure in the core, ATF is supposed to keep its integrity for a long enough time without a zirconium-steam reaction inducing hydrogen release. ATF is of critical importance for further improvement of the integral safety and reliability of nuclear power. Research, design and testing of the accident tolerant fuel in TVEL Fuel Company is provided and coordinated by the Bochvar High-Technology Scientific Research Institute of Inorganic Materials (Moscow).

TVEL Fuel Company of ROSATOM incorporates enterprises for the fabrication of nuclear fuel, conversion and enrichment of uranium, production of gas centrifuges, as well as research and design organizations. It is the only supplier of nuclear fuel for Russian nuclear power plants. TVEL Fuel Company of ROSATOM provides nuclear fuel for 72 power reactors in 14 countries, research reactors in eight countries, as well as transport reactors of the Russian nuclear fleet. Every sixth power reactor in the world operates on fuel manufactured by TVEL.

Notice of Press Conferences to be held in lead-up to Shareholders Meeting
April 30, 2021