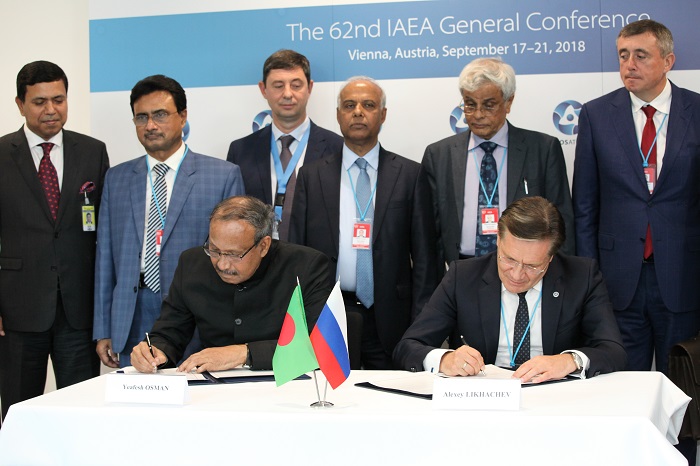 On September 17, on the sidelines of the International Atomic Energy Agency (IAEA) General Conference in Vienna, Bangladesh and Russia signed a Protocol to amend the Agreement between the Government of Russia and the Government of the People’s Republic of Bangladesh on partnership in the construction of a nuclear power plant on the territory of Bangladesh dated 02.11.2011.

The document was signed by the Director General of ROSATOM Alexey Likhachev and the Science and Technology Minister Yeafesh Osman.

The Protocol implies the possibility of involving a specialized Russian company into the design and installation of Physical Protection System for the main and auxiliary facilities of the Rooppur Nuclear Power Plant. The document also says that all the safety and security measures to ensure physical protection will be taken in accordance with the requirements and the guidelines of IAEA.

Rooppur NPP with two VVER-1200 reactors and the total capacity of 2400 MW is being constructed under the Russian design, 160 km from Dhaka, the capital of Bangladesh, in accordance with General Contract dated 25 December 2015. The General Contractor is Atomstroyexport (the engineering division of ROSATOM). The Russian design with VVER-1200 reactors that was selected for the first NPP in Bangladesh, was successfully implemented at Unit No 1 of Novovoronezh NPP-2. This is an evolutionary GenIII+ design which fully complies with all international safety requirements. In 2017, the well-known international magazine POWER (USA) rated the new Russian power unit among the three best nuclear power units in the word. In 2015-2016 preparatory works were performed at the construction site, detail design documentation and materials for receiving the license for the power unit location and construction, were developed. In 2017, Rooppur NPP project implementation continued according to the schedule. On 4 November 2017, the regulatory authority of Bangladesh (BAERA) issued the license for the NPP design and construction. On 20 November the ceremony of first concrete pouring for power unit No 1 took place. On 14 July 2018 the active phase of construction of power unit No 2 commenced marked by the ceremony of first concrete pouring into the power unit foundation. Each stage of Roopur NPP construction will be stringently monitored by IAEA and the national regulatory authority.

ROSATOM is one of the global technological leaders. It is one of the largest companies of the Russian Federation and largest taxpayers of the country. It brings together nuclear power and power engineering assets, as well as NPP design and construction. ROSATOM is the largest electricity generating company in Russia, producing 202.868 bln kWh of electricity in 2017 (196.366 bln kWh in 2016) or 18.9% of the country’s total generation of electricity. ROSATOM holds first place for the largest portfolio of foreign construction projects (36 NPP Units in 12 countries). ROSATOM produces annually approximately 3,000 tons of uranium production abroad excluded. Raw materials of the Russian and foreign deposits (particularly in Kazakhstan) will be enough to supply both domestic and international projects of Rosatom for the next hundred years. ROSATOM covers 17% of the global nuclear fuel market. ROSATOM also manufactures equipment and produces isotopes for nuclear medicine, carries out research, material studies. It also produces supercomputers and software as well as different nuclear and non-nuclear innovative products. ROSATOM’s strategy is to develop clean energy projects, including wind energy. ROSATOM brings together over 300 enterprises and organizations, including the world’s only nuclear icebreaker fleet.