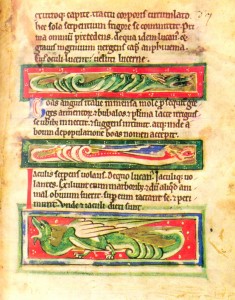 The text about the three “natures” of the serpent is traced back to Greek “Physiologus”, though it does not include the traditional quotation from the Gospel /Matthew, 10:16/, and in the bestiaries of the 12th century it is placed in the section about snakes in keeping with the zoological classification that was taking shape in the “Physiologus”. In the Saint Petersburg Bestiary it concludes the manuscript. The “natures” of serpents are described as follows: First, in the old age the serpent scrapes off its old skin by creeping through a crack in a rock. The Latin versions and the bestiaries give a detailed interpretation of this quality, a development of the original interpretation given by the “Physiologus” which is based on the biblical text: “strait is the gate, and narrow is the way, which leadeth unto life” /Matthew, 7:14/. The serpent is compared with an old man rejuvenating in the tribulations of life and becoming a new man, Christ, by grasping the commandments of Christ, since Christ is the spiritual stone, narrow and strait. Second, when the serpent approaches the river, it does not take its venom along with it but pours it into a crack. The serpent is likened to a person who is going to drink the eternal life-giving water of the teaching of Christ, that is leaving behing evil intentions and the poison of the soul to hear in the church the word of God. Third, the serpent is afraid of a naked person and attacks the one with his clothes on. This is an analogy to Adam: the serpent could do him no harm so long as he was in the Paradise. In the bestiary the story given in the “Physiologus” is complemented by all kinds of knowledge about serpents, which is to be found in the work by Isidor /XII.I.43/ and Pseudo-Hugh /111.53/ and originated from antiquity /Pliny, XX.23.95/. The story tells us that serpents live a long life, that their sliding movement is swift and they can cure their blindness by fennel. A serpent will survive, the story goes on, even if there remains an inch of its body at the head.
Quoting Ovid and Pythagoras, who believed that snakes were created but of the spinal cord of dead bodies, the text gives a typically medieval interpretation of the ancient idea of the relationship among man, the snake and death: since serpent the beguiler is to blame for man’s mortality, the serpent appeared owing to man’s mortality. The story of the serpent’s rejuvenation is preserved by Pierre of Beauvais /II. 217/ and Brunetto Latini /I.V.138/. Albert the Great enlarged upon the description of the natural characteristics of snakes /b.XXV/. In Romanesque art representation of snakes shows a broad variety of symbolic meaning. The symbolic treatment of the snake, which signifies man rejuvenating due to the sacrifice of Christ, is juxtaposed with the meaning of serpent, the beguiler, at the foot of Romanesque crucifixes. The snake creeping through a chink to discard the old skin became a traditional illustration for a text about snakes in bestiaries.