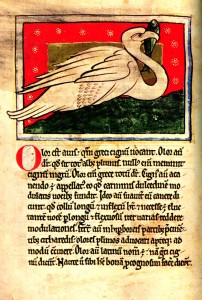 Swan /olon/ 10X7 cm
The whole text is taken from Isidor /XII.VII.19/ who used a story by Pliny /X.23.32/. The swan is all white, and is called “olor” from the Greek “holos” which means “all”, since “Nobody has ever heard of a black swan”. The singing of the swan, already mentioned by Plato /Phedon 85 B/, is so sweet due to the vibration of sound in his long-curved neck. The text says that in the country of Hyperboreans swans took part in the concerts of Kithara-players, and that sailors believed the bird brought luck as it never plunged into the sea.
“Aviarium” /53/ identifies the swan hiding its black flesh by snow-white feathers with a sinner who pretends to have been put wise and reformed. The author of the “Bestiary of Love in Verse” /221/ compares the singing of a swan with the art of a poet in love. Pierre of Beauvais speaks about the singing of a dying swan /III.233/. Brugetto Latini relates the text of the bestiary /I.V.153/. Albert the Great pays more attention to the natural qualities of the bird /XXIII.1.22/. The swan, as well as the eagle, the lion, the stag and the yale, became in the late Middle Ages a popular emblem and was given pride of place in late feudal heraldry.