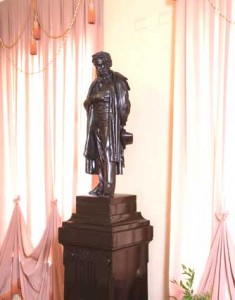 The exhibition of the museum, which was founded in 1899, shows the development of Russian literature beginning with the most ancient masterpiece — Slovo o Polku fgoreve (The Lay of Igor’s Host). Special sections of the exhibition are devoted to the work of A. N. Radishchev, M. Y. Lermontov, N. V. Gogol, I. S. Turgenev, A. M. Gorky and V. V. Mayakovsky.
The museum is affiliated to the RussianAcademy of Sciences Institute of Russian Literature, known as the Pushkin House. It was founded in 1905 by the prominent scholars N. A. Kotlyarevsky and
B. L. Modzalevsky. They purchased the library that had once belonged to A. S. Pushkin, the collection of his manuscripts and books on the history of Russian literature.
The Manuscript Department of the museum, organized in 1908, includes over 500,000 catalogued items with as many as 1,700 of Pushkin’s manuscripts among them. The magnificent library of the museum numbers about 370,000 volumes.