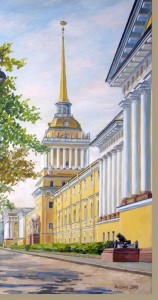 The silhouette of the Admiralty, engraved on the medal For the Defence of Saint Petersburg, is a symbol of the hero-city, the port-city. The setting up of the Admiralty was closely connected with the foundation of the Russian Navy and took place in the early years of the construction of the city. The then shipyard also served as a fortress. 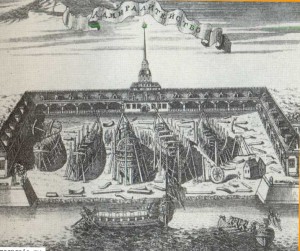 On June 15, 1712 the first big Russian warship Poltava, was launched on the Neva.
In the 1730’s the architect I. K. Korobov erected the stone building of the shipyard. The present Admiralty building, constructed in 1806—1823 by the architect A. D. Zakharov, is a masteroiece of world architecture and the finest work by this architect. The Admiralty Spire glorified by Pushkin rises to a height of 72 metres.
The slender central tower lavishly adorned with sculptures executed by F. F. Shchedrin, S. S. Pimenov and I. I. Terebenev, the two pavilions and the monumental facade of the Admiralty produce an indelible impression.

The Central Tower of the Admiraliy. Old photo. 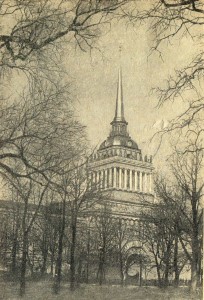