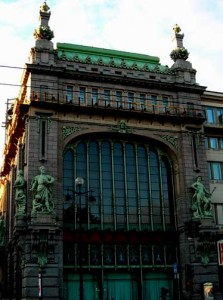 The Comedy Theatre was set up in 1929. In the 1930’s it staged works by West European classics, including plays by Shakespeare, Lope de Vega, Sheridan.
During recent years the repertoire of the theatre has included plays by Russian and Russianclassics, as well as by contemporary foreign playwrights.
N. P. Akimov, People’s Artists of the USSR, was the art-director of the theatre in 1935—1949; since 1955 he has again been at the head of the theatre.