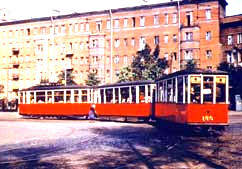 The ten kilometre line of the Prospect Karla Marxa and the Prospect named after Engels runs towards the north, from the Pirogov Embankment of the Neva River, up to Poklonnaya Gord (Hill).
These two main thoroughfares of the Vyfwrg District have changed beyond recognition during the years of Soviet power.
Just a few brick factory buildings, old and sooty, are the only reminders of the former dirty and muddy Sampsoniyevsky Prospect and the Vyborgskoye Chaussee; the once gloomy brick and wooden barracks for workers have been replaced by new blocks of dwelling houses. Even the old residents would hardly recognize this part of the city.
The reconstruction of these avenues is being carried out in strict accordance with the general plan and under the supervision of such architects as L. E. Ass, V. F. Belov, A. K. Barutchev, Y. A. Macheret, A. V. Gordeyev, A. V. Zhuk and others.
A great deal has already been done to remove the traces of the disorderly and chaotic way in which capitalist builders laid out this part of the city; the new houses and the trees and bushes along the boulevards have screened the old factories which are not attractive to the eye; the picturesque layout of the blocks has taken full advantage of the numerous parks of the district.
A number of houses are effectively turned en fafade perpendicularly to the avenue near the garden of the Vyborgsky Palace of Culture, at the corner of Neyshlotsky Pereiilok (Lane).
The following places are particularly conspicuous for their architecture: the houses near the Pervy Murinsky Prospect (1st Murinsky Avenue), the ensemble of houses near Serdobolskaya Street, where the Prospect named after Engels begins, and the lovely square on the Vtoroi Murinsky Prospect (2nd Murinsky Avenue), where multi-storey houses with cemi-circular facades have been constructed. 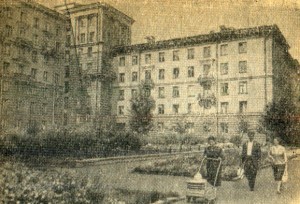 The entire area off the well-built Prospect named after Engels has the air of a construction site, houses are being built all along Beloostrovskayn Street, the Prospect named after N. I. Smirnov, and Bolshaya Osipovskaya Street. Here the speedy method of mounting a dwelling house ‘direct from the lorry’ — by employing prefabricated block-apartments— has been successfully used on one of the construction sites.