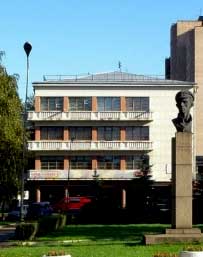 This House of Culture was built by the architects A. I. Gegello and D. L. Krichevsky for the benefit of the workers of the Kirov Plant. The House of Culture was named after I. I. Gaza (1894—1933) — a worker at the Putilovsky Zavod (Plant)—who took an active part in the events of the Great October Revolution and was the Komissar (Political Commissioner) of the famous Red Putilov Armoured Train No. 6 named after V. I. Lenin.