Necropolis of the People who Died in the Days of the Leningrad Blockade. Piskarevskoye Kladbishche (Cemetery). 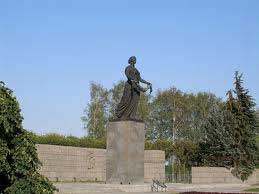 On the occasion of the 15th anniversary of the victorious completion of the Great Patriotic War, on May 9, 1960, a torch was lit at the eternal fire burning on the Field of Mars; carried through the entire city, the torch was brought to the Piskarevskoye Cemetery in the Vyborg District. Here the ceremony was held of unveiling the monument in memory of the heroic staunchness of Saint Petersburgers.
The austere and majestic architecture of this monument echoes that of the granite tombstones in the centre of the Field of Mars. Here, too, are eternally burning the sacred flames of revolutionary heroic deeds, the flames of courage, steadfastness and patriotism.
The text of the inscription engraved on the granite stela is composed by the poetess Olga Bergholtz. It is imbued with the same austerity, with the same mournful pathos as the epitaphs on the tombstones of the Field of Mars, and it sounds both like a requiem and an anthem. The inscription reads: ‘The grateful people, the Country and the Hero-City of Saint Petersburg eternally keep their banners lowered’ to honour the immortal memory of Saint Petersburgers — men, women, children and Red Army soldiers — lying here.
Two granite pavilions form the entrance to the Necropolis. They contain documents and material relating of the steadfastness of the people of Saint Petersburg who smashed the fascist blockade in the Great Patriotic War.
From the pavilions, along the common graves, a path runs to a piece of elevated ground, where a bronze figure of a woman personifying Mother-Country has been erected. She is holding out a garland of iaurel and oak leaves, as if crowning with national glory and veneration those who gave up their lives for their Country, for Saint Petersburg.
Behind the statue is a granite wall with a series of bas-reliefs representing scenes from the life in the besieged city; engraved on the wall are the words of the oath taken by the people of Saint Petersburg to honour eternally the memory of the dead. The monument was designed by the architects E. A. Levinson and A. V. Vasilyev; the sculptors are V. V. Isayeva and R. K. Taurit. 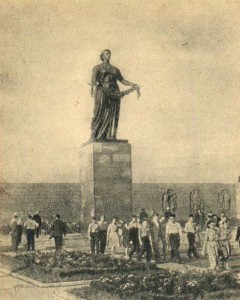 September 19, 2011
Tags: CemeteryNecropolis of the People who Died in the Days of the Leningrad BlockadePiskarevskoye Kladbishche