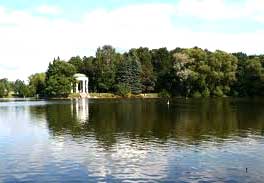 Together with the Moskovsky Park this is one of the youngest parks in the city. Its layout was designed by a group of architects headed by A. S. Nikolsky; they took advantage of the old Beloselsky Park on Krestcvsky Island which had remained in good condition.
The Primorsky Victory Park was planted by the people of Saint Petersburg themselves in honour of the victory over fascism. Large scale work began in October 1945 and within a month the people of Saint Petersburg had planted 500,000 trees and shrubs. The Kirov Stadium, one of the largest in the country, is situated on the territory of the park.