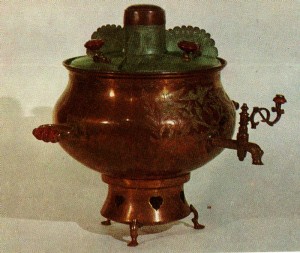 The samovar cooker shaped as a cauldron was invented at some earlier date. Several specimens have survived from the mid-18th century. In the 19th century samovar cookers were also produced at samovar factories. This type of cooker was a great convenience. It had three compartments and could be used to prepare three dishes at a time. The food was served with the help of a special ladle.