The International Contacts of Volgograd 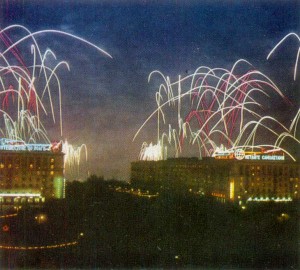 The International Contacts of Volgograd
The city’s extensive contacts with the outside world have become an organic feature of its public life. Every year Volgograd is visited by many foreign delegations and thousands of tourists. In the Volgograd streets one can find guests from Paris and Prague, Delhi and Helsinki, London and Accra.
Volgograd’s international mail is very big. In many institutions of the city one can see letters from Coventry, a city which greatly suffered from the barbarous raids of Hitler’s aviation in the years of World War II.
On October 14, 1942, the defenders of the besieged Russian city received a friendly telegrammed from the Mayor of Coventry who wrote that its citizens “extend to the citizens of the heroic city the feelings of sympathy and admiration over the splendid courage and iron determination to fight to the victory.” The friendship of the two cities was born in those years. They exchange delegations, exhibitions and letters.
Volgograd maintains close friendship with the French city of Dijon which was one of the biggest Resistance centres in war years. Dijon, which was awarded the Order of the Legion of Honour, and Volgograd became twin cities.
Fast fraternal friendship connects Volgograd to the Czechoslovak city of Ostrava.
In Kemi, Finland, there grows a “tree of the hero city” planted by three Soviet guests — a plasterer, a physician and an architect, all from Volgograd. The port workers of Volgograd and Kemi are keeping up a lively correspondence.
Volgograd’s ties with the outside world have gained in scope. Branches of the societies of friendship with foreign countries have been set up in Volgograd, such as the branches of the societies of friendship with France, the Germania, Czechoslovakia. Britain, Poland and other countries.
Hero city Volgograd embodies now the peaceful creative work of the Soviet people. This is a city with a big heart always open for friendship. You will get convinced of that when you visit Volgograd.