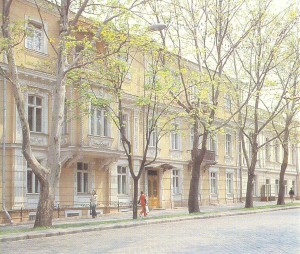 The street takes a quiet start, shadows fall on its cobble-stones as the crowns of the mighty plane trees that line the street meet overhead. Even during the hottest days in summer it is cool, because usually there is a breeze from the sea. The pavements are laid out in big stone slabs.

The first few blocks of Pushkinskaya Ulitsa, like those of the other major streets near the sea, have many fine buildings, a number of which are under the protection of the state as monuments of architecture. 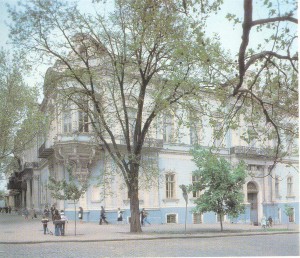 Up to 1880 the street was known as Italyanskaya Ulitsa (Italian St.):

The tongue of Golden Italy Rings out on this gay street, wrote Pushkin. It was on this street that architects,  musicians, singers and artists from Italy lived, but in 1880 the street was renamed after Pushkin to commemorate his stay in Odessa. A marble memorial plaque on house No. 13 notes that he stayed in that house and in 1963 a Pushkin museum was opened in the building. It is one of the departments of the Museum of History and Regional Studies and deals with the Odessa period in the life of the poet.

The building itself dates back to 1821, but the architect is unknown. What lends it particular charm is the original combination of horizontal and vertical components. The facade is divided into three vertical parts, with the two side ones protruding. All three have a common horizontal relief in the form of a cornice over the second storey and a bar, which completes the third storey built on later on. The second-storey windows are also topped by elegant cornices.

Pushkinskaya Ulitsa is well known to art critics and art lovers, for No. 9 houses the Museum of Western and Oriental Art, one of the best in the Ukraine. Its premises, a lovely palace with a bluish-white four column entrance belonged, before the revolution, to a rich merchant. It was built in 1856 (architect Ludwig Otton). As you enter the building by the main entrance you

find yourself in a large hall in the styles of Renaissance and baroque. A marble stairway leads to the second floor and the main apartments. The interior is richly decorated: moulded ceilings, and parquet floors made from valuable species of wood.

The museum was founded in 1920 and its 6,000 exhibits include antique, West European and Oriental art. The biggest collection is that of West-European art. There are canvases by Italian, French, and Dutch painters such as Frans Hals, Michelangelo de Caravaggio, Alessandro Magnasco, Antonio Canaletto, Francesco Guardi, Lucas van Leyden, Mikhaly von Munkacsy…

The development of Odessa at the end of the last century was very closely linked with the work of the city architect Alexander Bernardacci. He was born in the town of Pyatigorsk in the North Caucasus, a town almost completely built by his father and uncle, the Bernardacci brothers, who had left their native Switzerland to settle in Russia. Alexander graduated from the Building College in St. Petersburg and for a long time was the city architect of Kishinev. In 1878 he moved to Odessa and during the thirty years he lived there. He designed many fine buildings.

Three of them are at the beginning of Pushkinskaya Ulitsa. Opposite the museum of Western and Oriental Art is the House of Political Education (No. 10, built in 1900 as a Bank). It attracts attention because of its monumental proportions. The facade is in the style of the Renaissance with huge semi-circular windows and a high wide entrance. A marble stairway leads to the second-storey hall which has windows on either side. The walls of the stairs are faced with marble. 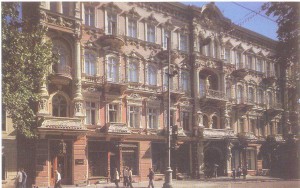 The second Bernardacci building stands next door to the Pushkin Museum and is the Intourist Hotel Krasnaya (Bristol Hotel) which can accommodate  140 people. It was built in 1898-1899 and the architect found a happy solution to the problem of building a five-storey corner house with one street having a sharp incline. He combined elements of Renaissance and baroque styles. The Odessa Intourist Office is situated in this building-entrance from Ulitsa Rozy Luxemburg (R. Luxemburg St.). 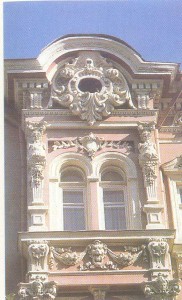 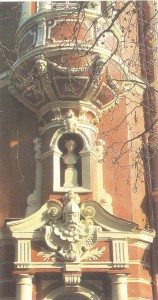 The third Bernardacci building on Pushkinskaya Ulitsa is the Philharmonic concert hall (No. 17). The foundation stone was laid in the autumn of 1894 on the first day of Odessa’s second century,

and construction was completed four years later in 1898.

Originally the building was intended as the new stock exchange, a temple to the God of Commerce Mercury. This is why the walls of the vast hall (910 sq. m of floor space and 15 m high) were decorated with six panels by the artist Nikolai Karazin depicting commerce at various stages of man’s history. The panels over the doors by the Italian artist Guiseppe Cassioli illustrate “Agriculture”, “Trade” and “Industry”.

In its architecture it resembles the famous Doge Palace in Venice, with the same early Renaissance forms of the Florentine Gothic school.

The building itself stands on a high concrete base made to look like granite. The facades are decorated with terracota tiles of different shades, and the huge windows with pieces of Carrara marble. The lighting of the stained windows at night is fairylike.

In 1961 the building was restored and a wide marble stairway added to link the large hall with the vestibule of the ground floor, which in no way clashes with the general architecture of the building.

From the side of Ulitsa Rozy Luxemburg there is a fine loggia. Its arch is decorated with frescoes, and on top of the rostral columns at the side of the stairs are internally lighted globes which symbolise Russia’s victories at sea. The ceiling is a painting of the heavens with the twelve symbols of the Zodiac. A bust of Bernardacci sculpted by Boris Eduards stands in a niche on the left-hand side. It was installed in 1900 to mark the fiftieth anniversary of the architect’s career.

Symphony concerts and recitals by Soviet and foreign musicians are regular features at the Philharmonic with its hall which can accommodate an audience of 1,000.