The monument to Alexander Pushkin. 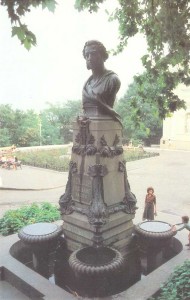 The monument to Alexander Pushkin. In 1820 he was exiled to the south of Russia for his freedom-loving verses, first to Kishinev, then to Odessa, where he spent 13 months from July 3rd, 1823 to August 1st, 1824. He was posted as archivist to the office of the Governor-General Mikhail Vorontsov. Their relations were far from good, Vorontsov hated Pushkin and finally got him removed from Odessa. The poet was forced to move to his father’s estate, Mikhailovskoye, in the Pskov region.

The Odessa period was very fruitful for Pushkin. It was here that he completed his poem “To the Fountain of Bakhchisaray”, started work on the poem “The Gypsies”, and wrote two-and-a-half chapters of Eugene Onegin, and more than 30 poems, including “Farewell to the Sea”, and “Night”.

Pushkin spent only one year in Odessa, but is remembered in many ways. Apart from the monument, one of the streets bears his name, and in the house where he lived there is now a museum.

The monument was unveiled in 1888, a year after the 50th anniversary of the poet’s death. Pushkin lived near the boulevard and used to walk along it often. Perhaps this is why it was chosen as the site for his monument. The sculptor Janna Polonskaya achieved a very close likeness and this monument is considered one of the best ever erected to the poet. The bronze bust stands on a high rectangular pedestal of rose-grey granite, with a lyre and star in its upper section. The dates 1820-1824 at the bottom of the lyre refer to his exile in the South while the inscription “To Pushkin from the people of Odessa” indicates that the money for the monument was collected by the population without any contributions from the authorities. On the other side of the postament is the date of the unveiling, 1888.

What lends this monument a special charm are the fountains that stream from the mouths of bronze dolphins into iron basins at the corners of the plinth.

We have completed the journey along the boulevard and reached its south-east end which joins onto Ploshchad Kommuny (Commune Square), a fine square lined with elegant old buildings, which always attracts visitors to Odessa.

Initially the square was known as the Birzhevaya (Stock-Exchange) since it was here that the building of the stock-exchange was built in 1834. When the stock exchange moved in 1899 to a new and more palatial building on Ulitsa Pushkinskaya, its old premises were taken over by the city authorities and the square became known as Dumskaya (City Council).