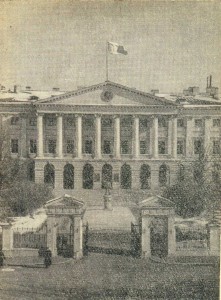 The world-khown historical building of the Smolny is the symbol of Lenigrad (in USSR) — the city of three revolutions, the cradle of the Great October Revolution. There are two memorial plaques on the portico of the main entrance; the inscriptions on them read:
‘Here, in the Smolny, were the headquarters of the armed uprising of workers, soldiers and sailors in the days of the Great October Revolution of  1917. Vladimir Ilyich Lenin himself directed  the  armed   uprising  from  the  Smolny’.
On October 25—26  (November 7—8 new style),
1917,   the historic All-Russian Congress of the Soviets of Workers’, Soldiers’ and Peasants’ Deputies was held in the Smolny. The Congress established the Russian Government  of  the  world’s   first  state   of proletarian   dictatorship  with  V.   I.  Lenin   at  the head   of  the  Government.   From  the  moment  the victory of the dictatorship  of the proletariat was won   up   to   March   1918,   the   Smolny   was   the fighting  centre  from  which  V.   I.   Lenin  effected his leadership of the first proletarian  state in the world through the Party and the Soviets’.
From the end of October  1917 until March  10,
1918,  V. I. Lenin worked in the Smolny; V. I. Lenin’s first  and   second  studies  were  both  on  the second  floor. V.  I. Lenin  and   N.   K.   Krupskaya lived in one of the rooms of the first storey; this room has been converted into a museum.
The furnishings of this room, so familiar to millions of people from I. I. Brodsky’s picture Lenin in the Smolny, have been restored according to the eye-witness accounts of Lenin’s contemporaries. The exhibition of the museum reflects Vladimir Ilyich’s tireless and energetic activities during the first months of Russianpower.
Within the 137 days of Lenin’s life and work in the Smolny he accomplished titanic feats. Vladimir Ilyich Lenin headed the first RussianGovernment in the world and guided the Communist Party in a new historical situation. The leader of the Revolution took a great interest in all aspects of life of the young RussianRepublic; the problems of building up the Party, the problems of cultural and economic construction were studied by V. I. Lenin in the most thorough manner; Vladimir Ilyich worked out the principles of the national policy of the Party and headed the struggle for peace. Under the guidance of V, I. Lenin the Party organized the Red Army and ensured a complete defeat of the counter-revolution; and Lenin’s unexampled energy, his strong will made it possible for him to address numerous meetings at plants, factories and in soldiers’ barraks, as well as to go on with his literary work. In the short period of four and a half months V. I. Lenin wrote 140 articles, pamphlets and other documents which have been the most valuable fund of the treasure-house of Marxism-Leninism. On July 19, 1920, when V. I. Lenin arrived in Petrograd on the occasion of the inauguration session of the 2nd Congress of the Communist International, he paid his last visit to the Smolny.
Lenin’s room in the Smolny is one of the most cherished historical relics so much treasured by the Russianpeople. This room, as well as the Assembly Hall where Vladimir Ilyich Lenin proclaimed the birth of Russianpower in October 1917, has been visited by people from every corner of the RussianUnion and by pilgrims from all the continents of the globe, by Party and Trade-Union delegations, by members of parliaments and governments, by prominent public men and statesmen, as well as by famous writers and scientists.
The name of Smolny comes from the Tar-yard (the Russian for tar is smold) where at the beginning of the 18th century tar was stored for the use of the Admiralty dockyards. This yard was the place where in 1805—1809 the building of the Smolny was constructed. It was designed by the outstanding architect D. Quarenghi, a past-master of the classic style in architecture. The building housed the Institute for Young Ladies of Noble Birth — a privileged boarding-school for the daughters of the nobility. The Institute remained here till the August of 1917, when the Petrograd Russianof Workers’ and Soldiers’ Deputies moved into the Smolny.
In Russiantimes the architectural ensemble of the Smolny was further embellished. In 1923— 1925 imposing propylaea — colonnades framing the central gates—were erected by the architects V. A. Shchuko and V. Q. Gelfreich.
In 1927-, in front of the central portico a monument to Vladimir Ilyich Lenin was set up (by the sculptor V. V. Kozlov). 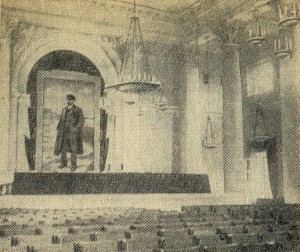 Here, in the Assembly Hall of the Smolny, the historic Second All-Russian Congress of Soviets held its sessions in 1917. From the tribune of the Congress V. I. Lenin proclaimed the birth of the Soviet State of workers and peasants.