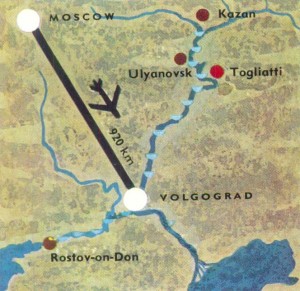 History
A fortress was built on a sleep bank of the Volga in the 16th century. It was named Tsaritayn.
In the course of three centuries the fortress on the Volga beat back the attacks of nomads. Its advantageous territorial position on a water artery, the closeness of (he sources of raw materials and consumption predetermined the further growth of the city.
Already in the second half of the 19th century Tsatitsyn turned into an important river port and a railway hub.
After the establishment of the Soviet power Tsaritsyn became one of the big economic centers of the Russia. It stood on vital routes connecting the central parts of the Russia with the richest food and raw material bases of South and South-East.
In the years of the Civil War Tsarilsyn was a center of the revolutionary forces of the entire south-eastern territory which rose lo the struggle against the White Guards and interventionists. The Soviet power awarded high distinctions to the heroic defenders of Tsaritsyn.
In 1925 the city was renamed Stalingrad (and in 1961, Volgograd). In the course of the fulfillment of the five-year plans, Stalingrad turned into a big industrial center. New factories and plants cropped up on the banks of the Volga. Tractors, steel, river tankers — such was a far from complete list of the output items of the city’s industry. Many residential houses, schools, theaters, childcare’s establishments and libraries were built. The city became a modern cultural center with a population of about 500,000.