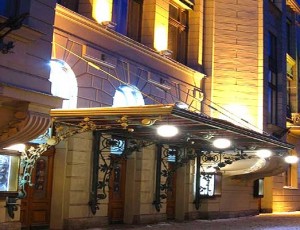 This is the first theatre for children in the RUSSIA It was established in 1921 on the initiative of the well-khown art-director A. A. Bryantzev.- The opening performance was given on February 22, 1922, when The Hunchback Horse, a stage version of P. P. Yershov’s fairy tale, was presented to the public.
During the years of its existence the theatre has staged more than 150 plays; it has given 15,000 performances attended by over 10,000,000 children. V. P. Katayev, S. Y. Marshak, E. L. Schwarz, A. Y. Brustein are among the dramatists who have regularly written plays for the Young Spectators’ Theatre. In the summer of 1962, on the 40th anniversary of the Young Pioneers’ organization the theatre moved into a convenient new building situated on the Zagorodny Prospect at the Vitebsk Station.